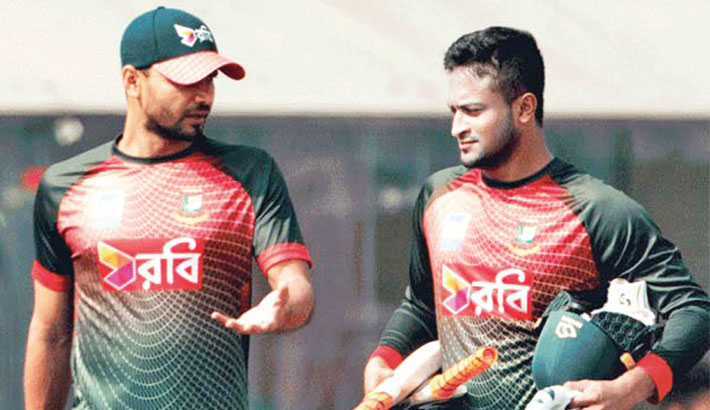 Bangladesh skipper Mashrafe Mortaza backed Shakib Al Hasan to shine despite all odds as he believes that Shakib has got the mental strength to handle all the difficulties and make his presence felt in the ongoing tri-nation as well as in the upcoming ICC World Cup 2019.

Shakib turned out to be at the receiving end since Bangladesh team was announced and began their preparation at Sher-e-Bangla National Cricket Stadium on April 22.

Shakib received harsh criticism from different quarters for not joining the national camp despite agreeing to do so a day after the camp started after his door was opened to feature for Sunrisers Hyderabad in the Indian Premier League.

Shakib, who recently recovered from a finger injury which prevented him from joining the national team for the tour of New Zealand, was earlier granted a no-objection certificate to make himself available for Sunrisers Hydrabad, but the presence of stalwarts like David Warner, Jonny Bairstow and Kane Williamson only prevented him from getting selected in the playing eleven.

While he was subject to criticism during his stay in IPL it looked as if his criticism started chasing him since his arrival to join the national team ahead of the tri-nation series in Ireland. Bangladesh Cricket Board (BCB) President Nazmul Hasan didn’t hide his disappointment after being informed of Shakib’s absence at the team’s official pre-World Cup photograph session.

Shakib arrived at Sher-e-Bangla National Cricket Stadium in the capital to report to the team management ahead of the tri-series in Ireland and the World Cup.

The board decided to complete all their pre-tournament formalities by Monday before the team’s departure to Ireland on May 1 in order to give the players a rest day on Tuesday.

However, Shakib left the field before the team gathered for the official photo shoot despite being informed by the management that his presence was required.

Later BCB president Nazmul informed that Shakib was apologetic for his actions and added that the all-rounder informed him that he did not read the message thoroughly where BCB informed him about the photo shoot affair.

Ahead of such a crucial international assignment such as World Cup when the leading performer of the team is haunted by one criticism after another, certainly it turns out to be a matter of concern for the team management considering whether he will be in the right frame of mind to give his best.

Nonetheless, Mashrafe is confident all these things won’t have any impact on the performance of Shakib as he had given noteworthy performances in trying conditions.

“Cricket is mental game and Shakib is very strong mentally,” Mashrafe told reporters ahead of the tri-nation series.

“He has been playing in the international cricket for a long time now and he can handle difficult situations very well,” he said.

“For a player like Shakib, it doesn’t matter whether he misses practice or join practice. It’s not something which can make him worry. He knows what he has to do,” he concluded.