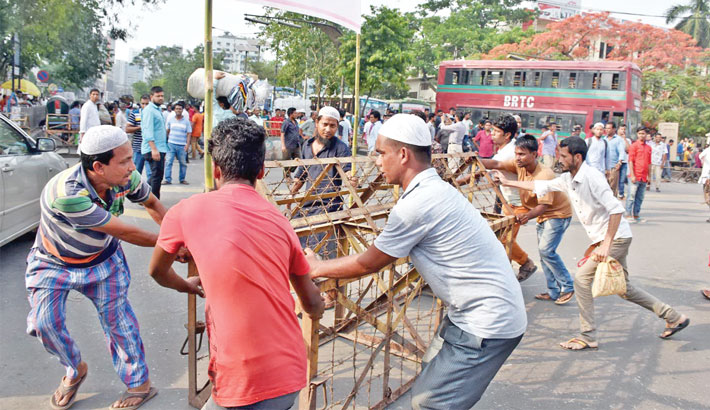 Hawkers are trying to block a road by putting up a barricade at Gulistan zero point in the city on Tuesday, demanding that they should be allowed to run their business on footpaths. – SUN PHOTO

Hundreds of hawkers, who were evicted from footpaths around four months ago, staged demonstration on the streets at Gulistan in the capital on Tuesday, demanding that they should be allowed to run their business on the walkways.

They gathered at the zero point of Gulistan, causing serious traffic congestion in the area.

Afterwards, the protesters spilled onto the roads in the adjoining areas at around 1:00pm.

“We have not been able to do business on the footpaths of Bangabandhu Avenue for the last four months. We have been forced to sit idle. As a result, we are suffering serious financial hardship,” said hawker Rubel.

“The mayor was supposed to announce his decision today whether to allow us to run our businesses on footpaths. But we did not find him (Sayeed Khokon) in his office. So we took to the streets,” he said.