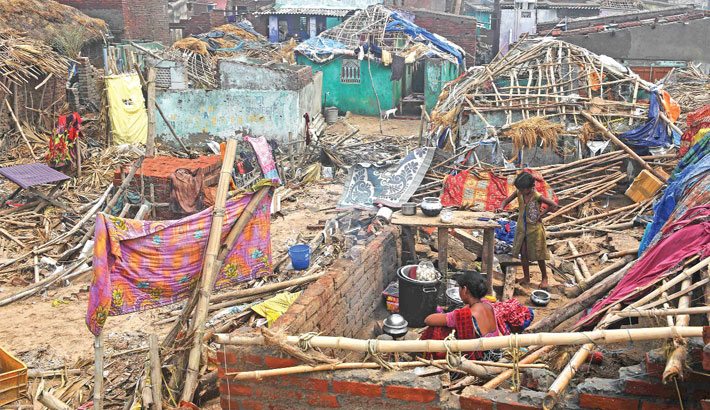 An Indian woman sit in the debris with a child in a storm-damaged building in Puri in the eastern Indian state of Odisha on Saturday, after Cyclone Fani swept through the area. Cyclone Fani, one of the biggest to hit India in years, barrelled into Bangladesh on Saturday after leaving a trail of deadly destruction in India. —AFP PHOTO

Puri: To assess the impact of the “extremely severe cyclone” Fani in Odisha, an aerial survey was conducted by the Naval Dornier Aircraft. Images show extensive damage to vegetation around temple town Puri.

Apart from a large number of trees, electric poles were also found uprooted which led to road blocks in the city limits of Puri. The roof of Puri Railway Station was also blown off.

Howling winds gusting up to nearly 93 km per hour were observed by the Dornier crew during the assessment.

Large scale water inundation was observed in many areas, especially in the low lying ones between Puri and the tourist attraction Chilka Lake.

The storm has now considerably weakened and is moving towards Bengal. The storm whipsawed trees, uprooted scores, impacted visibility due to rain leaving streets deserted in the state capital Bhubaneswar and Puri.

Over 11 lakh people have been evacuated in Odisha and The Army, Navy, Air Force, Coast Guard and disaster management agencies are on stand-by.The footage of the aerial survey is being shared with the State Administration officials for planning relief and rehabilitation activities.