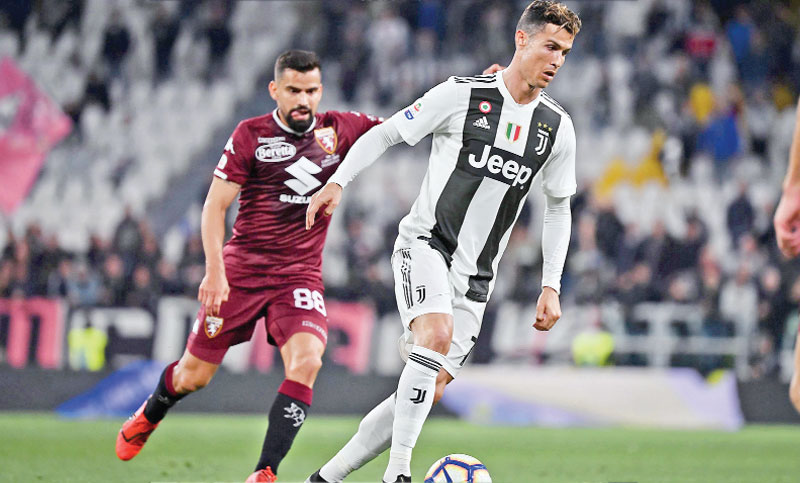 Juventus forward Cristiano Ronaldo, left, runs with the ball against Torino during their Serie A match at Allianz Stadium on Friday. The match ended in 1-1 draw. AFP PHOTO

Cristiano Ronaldo headed in a late equaliser to spoil Torino’s dream of a first win at city rivals Juventus in nearly a quarter of a century on Friday and frustrate their bid to move into the Champions League places.

Sasa Lukic had fired Torino ahead after 17 minutes in a match brought forward a day to avoid clashing with Saturday’s 70th anniversary of the air disaster that wiped out the all-conquering ‘Grande Torino’ team of the 1940s.

But Ronaldo headed in for 1-1 after 84 minutes to leave Torino in sixth place, two points off the Champions League berths with three games left to play.

Juventus have already sealed the Serie A title for the eighth season in a row.

“This draw burns, we could have scored a second goal and brought the win home,” said Torino coach Walter Mazzarri.

“The only time we let down our guard the phenomenon that is Ronaldo punished us.”

Torino have not won at Juventus since 1995 while their only win since then against their city rivals was at home in April 2015.

Ronaldo — who had scored the only goal in the reverse fixture in December — was partnered up front by teenage striker Moise Kean.

But Serbian midfielder Lukic broke through following a Miralem Pjanic error to slot in his first goal for Torino.

Ronaldo came close to an equaliser soon after with his powerful strike just wide with Salvatore Sirigu denying Blaise Matuidi.

But Juventus increased the pressure after the break with Ronaldo rising hightest to latch onto a Leonardo Spinazzola cross to beat Sirigu and deny Torino a third consecutive victory.

It was Ronaldo’s 21st league goal this season and moves him two behind Sampdoria’s Fabio Quagliarella, who leads the Serie A scoring charts.

The Portuguese superstar brings his tally of career club goals to 601, edging ahead of his Argentina rival Lionel Messi, who has 600.

“We’re lucky to play with Cristiano and live in this age of two star players,” said Juventus captain Giorgio Chiellini.