Bahadur Shah Park to get facelift 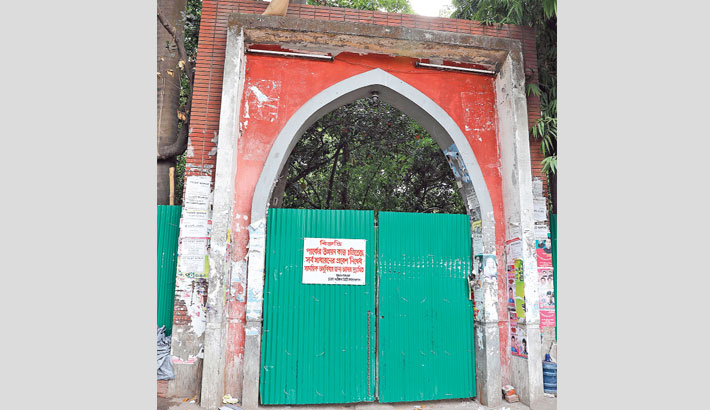 Renovation work of Bahadur Shah Park goes on in the old part of the capital.

The historical Bahadur Shah Park located in Old Dhaka’s Laxmibazar area will get a new facelift as it has been brought under a development scheme by Dhaka South City Corporation (DSCC).

Aiming to preserve the historical monument, giving access to all and stopping all sorts of anti-social activities, DSCC has enlisted the park for development under Jol Shoubuje Dhaka Project.

The age-old park was left in lurch for long and needed care. Now, it has been brought under the project along with 31 parks and playgrounds, a DSCC official informed.

While talking to the daily sun, Md Abdul Majed Mian,  a sub-assistant engineer (Civil) of DSCC zone 4,  said,   “For facilitating morning walkers, we shall extend the existing walkway while RCC drain will be constructed underneath so that rain waters cannot clog the park.”

“Because of the historical structure, including an obelisk and historic monument, we shall work to give a new facelift to the park by adding more facilities for users,” he said.

“We shall ensure safe drinking water for morning walkers and visitors by treating drain water of the park.”

As per DSCC officials, it had long been reported that the park turned into a hub of drug addicts. To redress the problem and to make the park accessible to all, we shall remove the boundary walls so that everything can be visible from outside. At the same time, crime will also come down.

“The monument will be dyed to make it attractive to visitors and a short history of the monument that it has been bearing since the carnage of the 1857 Sepoy revolt will be displayed. Instruments for physical exercise will be installed for morning walkers.”

For the visitors, a cafeteria will be constructed at its northern side.

Under the project, a number of saplings will planted to beautify the park and ensure greenery space for city dwellers.

While talking to the correspondent, the project director of the park development, also the superintending engineer (environment, climate and disaster management circle) of DSCC,  Munshi Md Abul Hashem said, “For the cause of development of the park, local people will have to sacrifice by giving sometime for its betterment.”

“Besides, there has been a demand from local people for renovation of the park that has been left in lurch for long.  Especially, there had been a narrow space for walkway. We shall install some benches for sitting facilities for walkers.”

Renowned architect Rafique Azam has set a plan for development of the park. “We hope it will be worth seeing after implementation of the project,” the engineer said.

Bahadur Shah Park has been a hub for morning walkers as hundreds of local people of different ages come here to walk in the morning or during daybreak. A number of patients with different ailments, including diabetes, come here for a walk.

During a recent visit, this correspondent found the park has been made off limits for visitors due to its construction work.

One of the aesthetic structures with wonderful architectural features of the park, an octagonal fountain, has been demolished by the development authorities.

According to locals, it was an attractive structure and people used to gather around it being charmed by its view.

While talking to the correspondent, a labourer informed that the fountain was demolished for development work of the park.

Around six labourers were seen working on the spot who were removing the rubble of the fountain.

In reply to a query, the project director said, “We have demolished the structure as it took a long space in the middle of the park hampering the development activities. Besides, the structure does not have any heritage value.”

However, local people have demanded restoration of the attractive fountain in the park.