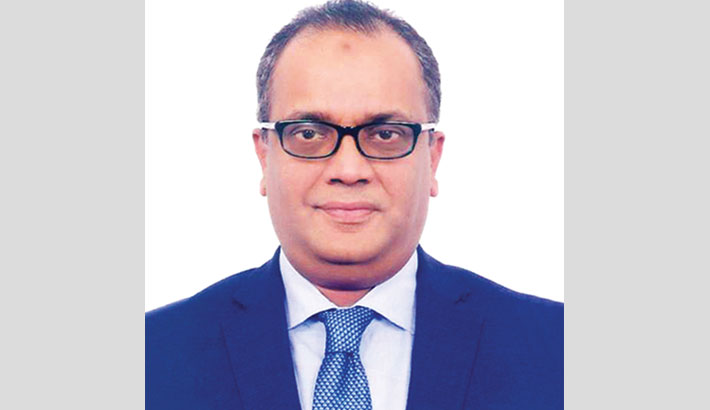 There is a widespread misconception that a rising sea-level with global warming will overwhelm Bangladesh’s coastal area contour by contour and will thereby displace as many as 10–30 million people in the 21st century. In some accounts, that situation will be aggravated by high rates of land subsidence, a recent doubling of the rate of sea-level rise (Smith, 2012) and rapid, on-going rates of coastal erosion. The accounts given to-date imply that the Bangladeshi people are helpless against a rising sea-level and will be unable to resist the rising water.

Those assumptions and descriptions are incorrect. Bangladesh’s coastal area is not uniform, nor is it static. It is dynamic, and so are the people of Bangladesh. Bangladesh has settled maritime boundary disputes with Myanmar in 2012 and with India in 2014 through arbitral methods. It is estimated that Bangladesh has acquired 118,813 square kilometres of the Bay of Bengal. The areas of resources include 200 nautical miles of exclusive economic zone and over 354 nautical miles of resources on seabed (continental shelf). It is estimated that the resources from the sea of Bangladesh constitute 81 per cent of the resources existing in its land territory.

Environmental scientists have an important role to play in establishing environmental facts in order to identify practical, area-specific, mitigation measures to counter realistically-probable impacts of sea-level rise in different geographical regions. This account illustrates the kinds of information on geomorphology, hydrology, soils, land use and socio-economic geography that are needed to provide a sound basis for planning area-specific measures to counter sea-level rise in low-lying coastal areas as elsewhere in the world.

The ‘Blue Economy’ is an emerging concept which encourages better management of our ocean or ‘blue’ resources. It underpins the thinking behind the Commonwealth Blue Charter, highlighting in particular the close linkages between the ocean, climate change, and the wellbeing of the people of the Commonwealth. At its heart, it reaffirms the values of the Commonwealth, including equity and public participation in marine and coastal decision-making.  It supports all of the United Nations’ Sustainable Development Goals (SDGs), especially SDG14 ‘life below water’, and recognises that this will require ambitious, coordinated actions to sustainably manage, protect and preserve our ocean now, for the sake of present and future generations.

Similar to the ‘Green Economy’, the blue economy model aims at improvement of human wellbeing and social equity, while significantly reducing environmental risks and ecological scarcities. It provides for an inclusive model in which coastal states - that sometimes lack the capacity to manage their rich ocean resources - can begin to extend the benefit of those resources to all. Realising the full potential of the blue economy means inclusion and participation of all affected social groups and sectors. 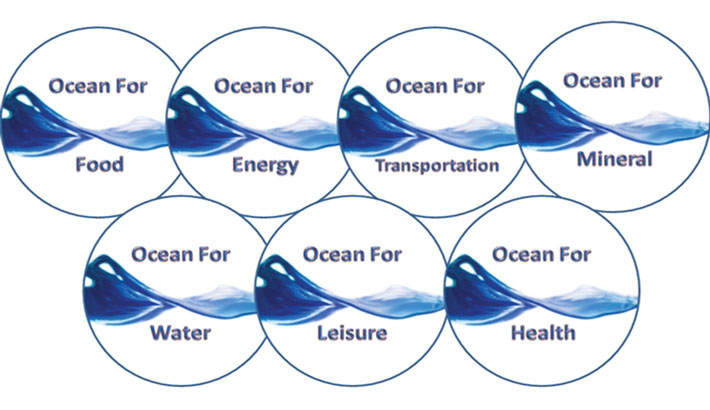 The worldwide ocean economy is valued at around valued at around US$1.5 trillion per year. Eighty per cent of global trade by volume is carried by sea. 350 million jobs worldwide are linked to fisheries. By 2025 it is estimated that 34 per cent of crude oil production will come from offshore fields. Aquaculture is the fastest growing food sector and provides about 50 per cent of fish for human consumption. On top of the traditional ocean activities such as fisheries, tourism and maritime transport, blue economy entails emerging industries including renewable energy, aquaculture, seabed extractive activities and marine biotechnology and bioprospecting. Blue economy also attempts to embrace ocean ecosystem services that are not captured by the market but provide significant contribution to economic and human activity. They include carbon sequestration, coastal protection, waste disposal, and the existence of biodiversity.

The 2015 WWF briefing puts the value of key ocean assets over US$24 trillion. Fisheries are now overexploited, but there is still plenty of room for aquaculture and offshore wind power. Aquaculture is the fastest growing food sector with the supply of 58 per cent of fish to global markets. Aquaculture is vital to food security of the poorest countries especially. Only in the European Union the blue economy employed 3362,510 people in 2014. Aquaculture, maritime biotechnology, bioprospecting, fishing, maritime transport, maritime and coastal tourism, mineral resources, offshore oil and gas, offshore wind power (also tidal and wave), shipbuilding and ship repair, desalination, carbon sequestration, coastal protection and waste disposal.

Existence of biodiversity is among the major areas of resources which can be tapped through proper utilisation of the blue ocean economy. As for terrestrial ecosystems, marine ecosystems can only provide their myriad ecosystem services to humanity if they are governed and managed sustainably through an effective ocean and coastal governance. UNDP’s Ocean Governance Programme works towards helping countries achieve this - from local level through initiatives like the Global Environmental Facility’s (GEF) Small Grants Programme, to regional efforts such as UNDP’s Large Marine Ecosystems programme, and global efforts on sustainable shipping in cooperation with the International Maritime Organization (IMO) and GEF.

In simplest terms, there are two elements for the blue economy. The first is the necessity of protecting – and restoring where needed – the existing ocean resource base that already supplies food and livelihoods to billions of people. Depleted fish stocks that are permitted to recover can ultimately deliver higher, sustainable fish yields and associated jobs. If protected and restored, coastal ecosystems such as coral reefs and mangroves can deliver increased coastal protection benefits from storm surges and sea level rise.

Coastal areas that reduce nutrient pollution and eliminate hypoxic areas can, in turn, enjoy higher fish yields and increased tourism revenue. The other side of the blue economy is where opportunities may exist for enhanced or new sustainable economic activity derived from the ocean. Progress and prospects for ocean-related energy, such as offshore wind and tidal energy, appear promising. Opportunities also exist to ‘monetize’ the value of highly effective coastal carbon stocks such as mangroves and sea grasses into carbon finance markets, or ‘blue carbon.’  Globally, aquaculture has been growing at a compounded rate of almost 9 per cent since 1980, and now supplies nearly half of the world’s consumed fish protein. However, much of it remains unsustainable in terms of pollution and impacts on species diversity, making this a critical blue economy opportunity to introduce more sustainable practices, such as integrated multi-tropic aquaculture. With support from GEF and UNDP, the IMO and the global shipping sector are taking pro-active steps to minimise the sector’s contribution to climate change through improved energy efficiency, which can, in turn, enhance the sector’s profitability, a true blue economy approach.

Mauritius is one of the glaring examples of how a country taps into the resources available in her Oceans. To fully tap the economic possibilities of the ocean, an Ocean Economy Unit will be set up with the responsibility of preparing a National Ocean Policy Paper and the merging of the Mauritius Oceanography Institute and the Albion Fisheries Research Centre into one single institution to boost up research capacity on the ocean economy and in line with the institutional rationalisation strategy. Moreover, an Ocean Observatory e-platform will be developed to support the Marine Spatial Planning Initiative of Mauritius, and a geotechnical study will be conducted in the extended continental shelf management area of the Mascarene region to explore its potential. According to the Budget, a Group Life Insurance Scheme will be launched for registered fishermen to cover any accidents and losses at sea. A grant of 60 per cent of the cost of acquisition of outboard engines and fishing nets, by fishermen cooperatives, up to a maximum of Rs 60,000 will also be introduced. All registered fishermen will be provided with a free ice box. With the aim of increasing the availability of fish locally and in line with the import substitution strategy, foreign industrial fishing companies will be allowed to fish in the shallow water banks provided they sell all their catch on the local market.

Concept at the core of the Blue Economy concept is the de-coupling of socio-economic development from environmental degradation. To achieve this, the Blue Economy approach is founded upon the assessment and incorporation of the real value of the natural (blue) capital into all aspects of economic activity (conceptualisation, planning, infrastructure development, trade, travel, renewable resource exploitation, energy production/consumption).

The Blue Economy approach recognises and places renewed emphasis on the critical need for the international community to address effectively the sound management of resources in and beneath international waters by the further development and refinement of international law and ocean governance mechanisms. In the Rio+20 outcome documents, “The future we want”, UN member states, committed to: “protect, and restore, the health, productivity and resilience of oceans and marine ecosystems, to maintain their biodiversity, enabling their conservation and sustainable use for present and future generations”.

Governance of the oceans and seas is a key global challenge. The number of international conventions and regional agreements makes it very difficult to ensure effective participation by coastal countries. Therefore, there is an increasing need for regulation on the basis of an appropriate balance between the demand for ocean’s natural resources and their sustainability.

Oceans are facing significant existential ecological risks that can negatively affect the social and economic prospects of all countries, particularly poor countries that are acutely dependent on oceans. Climate change, increased emissions of carbon dioxide, overexploitation and poor management of marine resources including fisheries, waste-water runoff, pollutants into waterways – all need to be considered seriously while the focus is only into the economic development.

Sustainable use of oceans is critical to poverty reduction, food security, livelihood sustainability and mitigating climate change. As unmanaged mass tourism may negatively impact coastal ecosystems depending on its impact which also be linked to the sustainable use of marine protected areas. Renewable energy, water treatment, marine wildlife watch and ecosystem conservation also have close synergistic relations with sustainable tourism.

The pollution generated by maritime transport, and especially ship-source oil is also a large concern issue today. Indeed, blue economy is very sensitive as it is related to ecosystem services, food security and the impacts of human activity. Noted issue is that the overexploitation and poor management of marine resources have resulted in lost opportunities, heightened food insecurity and diminished economic opportunities for some of the world’s poorest people too.

With a view to improving food security, eradicating poverty and delivering shared prosperity, global leaders, ocean practitioners, scientists, and representatives from government, businessmen, civil society and international organisations must come together to explore action-oriented partnerships, governance arrangements, investment frameworks and financing vehicles to turn the tide not only on the health of oceans but also how the resources of the sea could be used for economic emancipation.

The Functions of blue economic zone should be utilised to become a Middle Income Country (MIC). Proper and effective utilisation of marine resources is of key importance for promoting Bangladesh to a middle-income country. Bangladesh has a huge possibility to enrich her economy with sea-based resources through ensuring a sustainable balance between the protection of marine ecosystem and marine resources. After the settlement of maritime boundary dispute with India and Myanmar, Bangladesh has gained a defined maritime zone in the Bay of Bengal. Now, Bangladesh can create more space to ensure her economic growth through new investments in marine trade and commerce.

The Bangladesh government should go ahead with government and non-government joint investments through well-timed actions enacting exhaustive rules and regulations to ensure proper use of marine resources at the blue economic zone. If Bangladesh becomes able to utilise her marine resources actively, it is quite possible for her to be a middle-income country within a short time. The present study has tried to point out the possible contribution of the blue economy to make Bangladesh be a middle-income country briefly. Further research may be necessary to make a detail account about the prospects of the blue economy in the development of Bangladeshi economy.