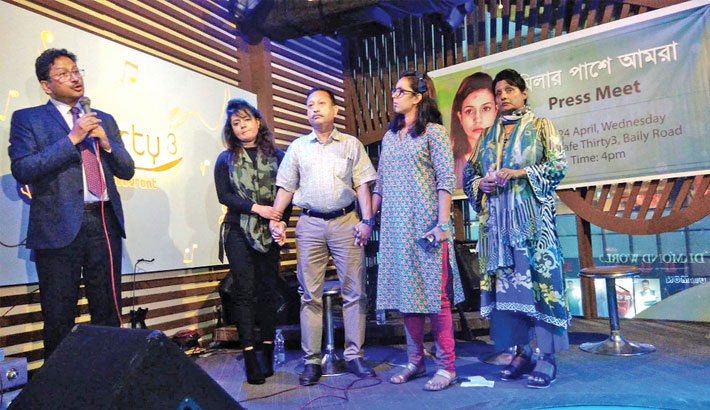 Popular singer Mila Islam, often considered a pioneering female pop artiste of Bangladesh, has expressed her misery at being victimised by her ex-husband and urged journalists to help her survive, reports UNB.

The singer broke down in tears while relaying her horrifying experiences at a press conference on Wednesday, at a restaurant in the capital. Prominent lyricist Asif Iqbal was present at the event, along with Mila’s family members.

Mila started her journey in the music industry in 2006. Her relationship with her now ex-husband, a pilot with US-Bangla Airlines- began also in that year. They got married in 2017, and just a few days later- she found out he was cheating on her and she herself became a victim of domestic violence.

“I loved him unconditionally, and I never wanted to be another example of those artistes who cannot value the commitment to their marriages- but he cheated on me. He was engaged in several physical relationships with other women, and brutally assaulted me on several occasions. He cashed in on my popularity and then treated me in the worst possible way. Till date he is threatening me and my father and promised to seek vengeances”, the singer said fighting back tears.

Speaking out as a victim, the singer expressed her standpoint by saying “I could have been another example of those unfortunate women who lost their battles- but I refused to be one. I always maintained sobriety and never attempted to diminish my family’s and nation’s reputation through any of my activities. Therefore, I am seeking justice for all my sufferings.”

Lyricist Asif Iqbal praised Mila for her brave attempt by saying “She is one of the most loved and iconic artistes of the nation, and we don’t want her to lose in this battle.”

Mila and her family members requested the journalists to spread her message to the authority and asked for appropriate punishments to her ex-husband for his misdeeds.