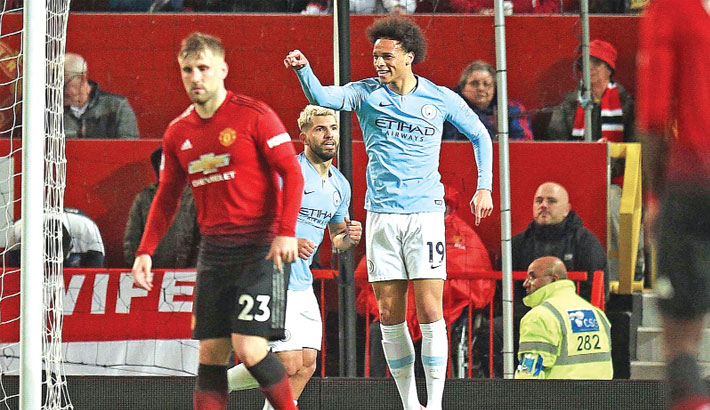 Manchester City took a huge step towards retaining the Premier League title as a 2-0 win at Manchester United on Wednesday took them a point clear of Liverpool at the top of the table with three games to go.

Bernardo Silva and Leroy Sane struck for the visitors in 12 second-half minutes at Old Trafford to inflict a seventh defeat in nine games on United, who remain three points adrift of the top four.

City have now won 11 straight Premier League games and further victories over Burnley, Leicester and Brighton will ensure Liverpool’s 29-year wait to win the title continues no matter what Jurgen Klopp’s men do in their remaining three games.

United boss Ole Gunnar Solskjaer made five changes in response to his side’s 4-0 humiliation at Everton on Sunday and was rewarded with a far more energetic and committed performance even if City’s greater quality eventually shone through.

Yet, Arsenal’s defeat at Wolves means the Red Devils are still very much in the race for Champions League qualification, should they beat fourth-placed Chelsea at home on Sunday.

Guardiola made just three changes from the team that gained some measure of revenge on Tottenham for their Champions League elimination last week, but the decision to recall captain Vincent Kompany seemed a questionable one early on as the Belgian struggled to deal with United’s pace up front.

Kompany was booked for barging Marcus Rashford just 10 minutes in as United enjoyed a bright start.

United goalkeeper David de Gea’s form has dipped dramatically of late and it was another night to forget for the Spaniard as he could have done better for both goals.

And the differing performances of the two goalkeepers proved key as City stopper Ederson rushed from his goal to make a brilliant challenge at Rashford’s feet as the England striker raced in behind Kompany once more.