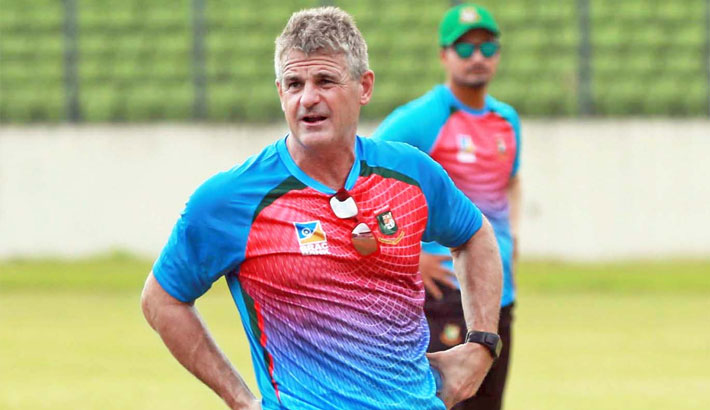 Bangladesh head coach Steve Rhodes is confident that Bangladesh will be able to put up a stable opening pair in the upcoming ICC World Cup 2019.

Bangladesh’s search for a stable partner in the opening slot alongside Tamim Iqbal is nothing new and has been going on for a long time.

Over the last 10 years, Tamim Iqbal single-handedly has been giving the top order some kind of solidity while he is yet to find a permanent opening partner.

So far 13 openers were tested in the spot as the opening partner of Tamim but all failed so far and now they will be pinning their hope on Soumya Sarkar and Liton Das to fulfill the responsibility of partnering Tamim.

Both Soumya and Liton had ordinary Dhaka Premier Division Cricket League (DPL) 2018-2019 outing before they kindled their flame at the fag end of the league. While Liton showed his talent by playing some delightful knocks, Soumya reached an even bigger milestone by becoming first Bangladeshi batsman to hit a double century in the List A cricket.

But while Soumya has shown that he has some form on his side, Liton followed up his poor New Zealand tour with only two fifties in eight DPL outings for Mohammedan Sporting Club.

“I loved what Soumya [Sarkar] has done in the last two games, getting a hundred and then scoring a double-century. It was interesting as (although) it was not down to me but once he got the hundred, I did tell him that ‘you are not going to get lots of chances to get a double century. If you get to hundred do not throw it away’. He had lots of time in that first game and ironically he then went and got a two-hundred. But I think that was not down to me but I did mention it to him. He is in wonderful form,” said Rhodes.

However Rhodes hinted that he would prefer left-hand and right-hand combination but added that he has faith on both Liton and Soumya.

“I don’t want to divulge too much into opening combination of World Cup. I think that’s wrong. But all I can say is that I have faith in both Liton and Soumya,” said Rhodes.

Soumya Sarkar and Liton Das, both talked up as among the most talented top-order batsmen in Bangladesh, have been frustratingly inconsistent in their international careers so far.

The only time Liton has really shown his ability was at last year’s Asia Cup final, in which he dominated India’s bowling to score 121 runs as Bangladesh went down off the last ball. Soumya made a sound start in 2015 but has had to mostly fight for his place in the ODI team since 2016.

Earlier this year, he scored his maiden Test hundred, against New Zealand in Hamilton, and on Tuesday, he became the first Bangladeshi to score a List A double-hundred.