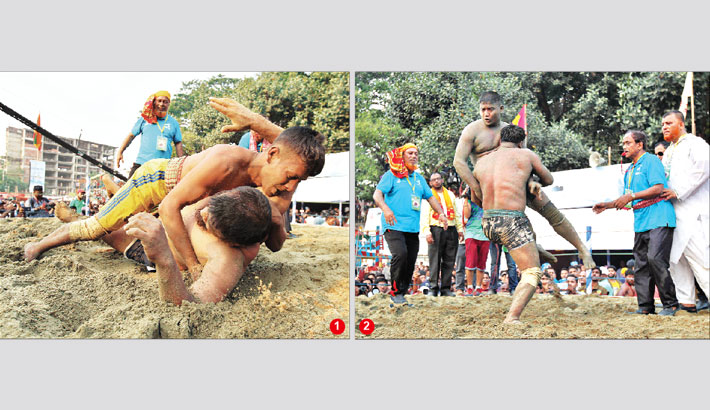 Md Shahjalal of Homna Upazila of Cumilla District became champion for the first time after participating for several times in the competition.

On the other hand, the runner-up Tariqul Islam Jibon, who hails from Chakaria Upazila of Cox’s Bazar District, won the crown for the first time last year.

On Thursday, Shahjalal and Jibon fought for around 23 minutes without any result. They pulled down each other for several times, but couldn’t win.

At one stage, a team of three referees led by Chattogram City Corporation (CCC) former Councillor MA Malek announced Shahjalal as champion on the basis of points.

After winning, champion Shahjalal in an instant reaction said he is very excited to be the champion for the first time in such a big competition.

“I will try to retain the success in future,” he said.

On the other hand, Jibon Boli alleged that he was declared defeated illogically by the referees.

A total of 111 wrestlers aging from 25 to over 65 years from different parts of the country including Cumilla, Chandpur, Cox’s Bazar, Noakhali, Feni and coastal areas of Chattogram fought in the first round of the competition which started at around 4:00pm.

In the semi-finals, Shahjalal defeated Shahabuddin of Moheshkhali Upazila of Cox’s Bazar district while Jibon defeated Md Hossain from the same area.

The champion was given prize money of Tk 20,000 while the runner up Tk 15,000 with trophies, organisers said.

Abdul Jabbar Sawdagar,  a prominent local merchant of Anderkilla Badarpati area, introduced the ‘Boli Khela’ as a traditional event in 1909 aiming at organising and inspiring the youths for anti-British Movement.