Barcelona on the brink of another Spanish League title 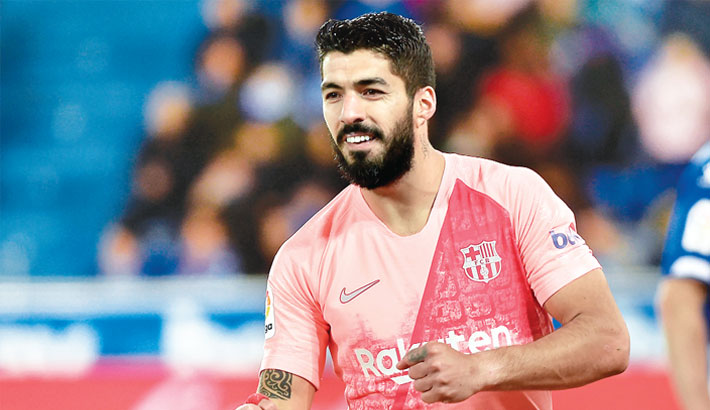 Barcelona will win La Liga on Wednesday if Atletico Madrid lose to Valencia after a 2-0 victory over Alaves gave them a 12-point lead at the top of the table.

Lionel Messi started on the bench at Mendizorrotza on Tuesday in a move that made clear just how comfortable Barca are in this title race, its conclusion surely now only a matter of when rather than if.

Should Atletico avoid defeat to Valencia at the Wanda Metropolitano, the Catalans will still be crowned champions on Saturday at the Camp Nou with a victory over Levante.

They could even have it wrapped up before kick-off on Saturday if Atletico fail to take at least four points from Valencia and Real Valladolid, the latter whom they face a few hours earlier on Saturday.

Real Madrid, who play their game in hand against Getafe on Thursday, sit 16 points adrift in third. Alaves stay eighth, their hopes of a Europa League spot fading fast.

Messi came on as a substitute in the 61st minute shortly after his team had scored twice, Carles Alena guiding one into the corner before Luis Suarez, in Messi’s absence, took and dispatched a penalty.

Valverde leaving out his captain and star player, presumably with an eye on next week’s Champions League semi-final against Liverpool, was a luxury Barcelona have earned and can afford.

Liverpool, still jostling with Manchester City in the Premier League, are unlikely to feel the same sort of confidence when they face Huddersfield on Friday.

Other players were preserved too. Jordi Alba, Clement Lenglet and Arthur Melo all began on the bench, allowing Samuel Umtiti more minutes as he recovers from a knee injury, while the struggling Philippe Coutinho started in a front three with Ousmane Dembele and Suarez.

Alena, the 21-year-old Spaniard, scored his second La Liga goal and showed again why many believe he could be a key figure for Barcelona in the years to come.

Suarez’s goal, meanwhile, was his 21st in the league and marks the fourth consecutive season in which he has passed the 20 mark for Barca.

He might have scored earlier but shot straight at Fernando Pacheco when sent clear in the opening stages, while Coutinho followed up but his rebound was blocked.

Sergi Roberto fired over from inside the area but it was his run down the right that created Alena’s opener in the 54th minute.