Shakib needs some matches to get into groove: Salahuddin 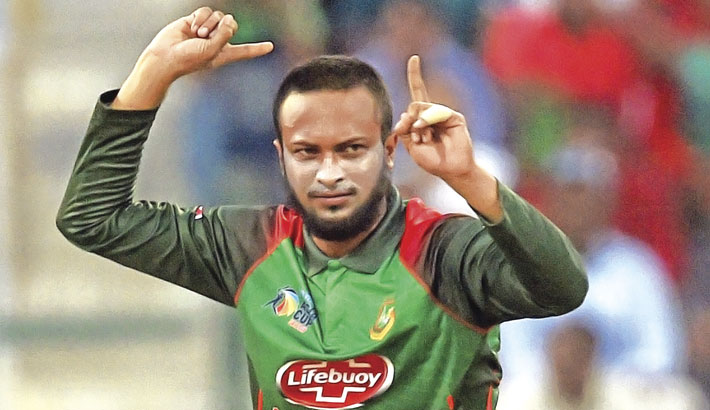 Bangladesh Test and T20i captain Shakib Al Hasan is doing fine and needs a couple of games to back into his groove, said his mentor and coach Mohammad Salahuddin who went to work with him in India recently.

Shakib, who is currently in India playing in the Indian Premier league (IPL) for Sunrisers Hyderabad, had called up his mentor Mohammad Salahuddin to work with him.

Shakib, who played only two games for Hyderabad and has since been unable to make it to the playing eleven, has urged Salahuddin to work on both his skills and mental aspect during his time off during the IPL.

Salahuddin returned home recently after working extensively with Shakib where they focused on different areas of his game.

“Basically he is out of cricket for a long time due to all of his injuries. He had a chance to do some extra practice as he was not playing matches he took it in both hands,” he said.

According to Salahuddin they had worked extensively on their batting though the main emphasis was just to make sure he is doing the routine work in correct manner.

“We tried not to put much emphasis on something extra rather we focused on doing our routine work and find out whether everything is in order or not. If we found out that we need to change some small aspects we just tried to do it,” said Salahuddin.

“Because if you are away from cricket for a while some changes might creep in your technique and that is one area we worked upon to make sure everything is in place as it was,” he said.

“We did a lot of batting because the wicket was very good and the ball was coming to the bat nicely with even bounce without getting low or things like that. In such cases you can always develop your squarer- the-wicket strokes,’’ he said.

Shakib was expected to join the national team’s World Cup preparatory camp, starting from April 22, since he wasn’t getting a regular shot in the playing eleven of Sunrisers Hyderabad in the IPL.

However, with foreign players’ slots opening up in the SRH unit, Shakib has instead opted to stay back in India and sought the board’s permission for the same.

Shakib, who recently recovered from a finger injury which prevented him from joining the national team for the tour of New Zealand, was earlier granted a No-Objection Certificate to make himself available for SRH, but the presence of stalwarts like David Warner, Jonny Bairstow and Kane Williamson didn’t allow him much opportunities to get in the playing eleven. However, with the departure of Bairstow an opportunity opened for Shakib which according to BCB officials, he wants to seize.

“Normally he doesn’t get bogged down easily but still I feel he will need a couple of matches to get back into full rhythm,” concluded Salahuddin.