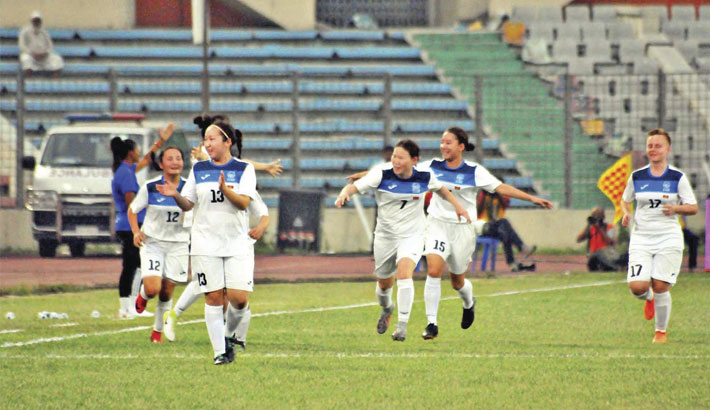 Players of Kyrgyzstan U-19 National Women’s Football Team celebrate after scoring a goal against UAE during their Bangamata Women's U-19 International Gold Cup match at Bangabandhu National Stadium in the capital on Wednesday. Kyrgyzstan won 2-1. —BFF Photo

Kyrgyzstan Under-19 Women’s Football Team thrashed United Arab Emirates by 2-1 goals in their Group B encounter of Bangamata Women’s U-19 International Gold Cup Football at Bangabandhu National Stadium in the capital on Wednesday.

Kyrgyzstan created chances fairly early in the match as nearly took the lead on the 5th minute of the match as their ace forward Boronbekova Aizhan beautifully received a long pass from fellow forward Saskeeva Aiperi and split through UAE defence. She even managed to lure UAE goalie Aya Walid out of D-box and later dibbled past a grounded Walid but UAE were saved by a valiant efforts from their defender Fatima Hosani.

But the drama was far from over as Kyrgyzstan broke the deadlock on that same minute with a curving corner kick of Boronbekova as her kick swirled into the nets on the face of poor goalkeeping from Walid.

Poor goalkeeping from UAE didn’t end there as it saw Kyrgyz eves double their lead on the 17th minute with a goal which appeared to be an exact reenactment of the first one.

Boronbekova took a corner from the right side which could have been a regulation glove-in by Walid but to UAE’s dismay, Walid just appeared to flap the ball into air as Yrysbek Kenzhebubu headed the flap into the nets.

UAE came back to the match with a penalty goal on the 37th minute of the match as Kyrgyz defender Kelishova Baiana handed the ball in her attempt to clear an attack.

UAE’s technically gifted booter Shahd Zarkan fooled Kyrgyz goalie Tolonova Aichurek to a dive to her left as she sent in a blasting left-footer into the right edge with little elevation.

Despite playing with all their heart, UAE couldn’t latch on to opportunities as the Arabs missed a sensational opportunity to equalise the score-line on the 49th minute of the match as UAE skipper Alanoud Zarkan’s couldn’t head a free-kick of fellow midfielder Najia Ali into the nets.

Najia’s long hauler from way back in the centre-line was adeptly received by Alanoud. All the while Kyrgyz goalie Tolonova went ahead to tackle Alanoud herself but not with full conviction and was outpaced by Alanoud.  Despite having a unguarded post, Alanoud couldn’t net the goal as her first-touch header was too heavy which had the ball sprinting out of the field.