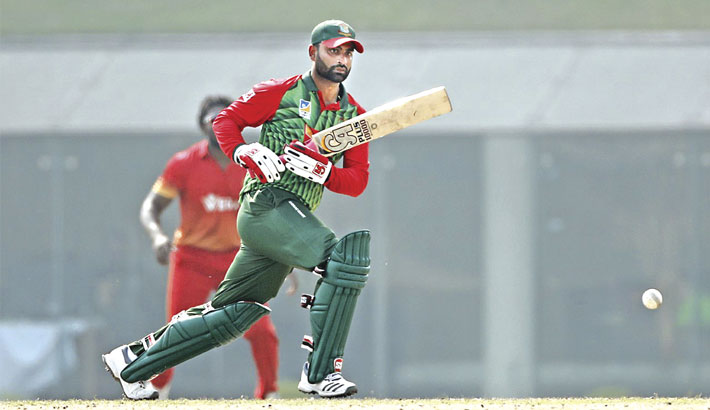 Bangladesh opener Tamim Iqbal believes that the upcoming tri-nation series in Ireland is important ahead of ICC World Cup 2019 as it will provide them with the opportunity to see how they need to approach scores over 300 runs.

With the World Cup approaching fast all the teams are taking preparations to make themselves ready for the global tournament, scheduled to be held in England from May 30.

Bangladesh as part of the preparation will take on Ireland and West Indies in a Tri-Nation series in Ireland which is expected to give them a taste of what to expect in England when they start their campaign for the World Cup.

“Look we are not used to chasing 340 or 350 runs,” Tamim told journalists at Sher-e-Bangla National Cricket Stadium on Wednesday.

“We all know that in the World Cup scores of 280-320 runs are common and we have to work out how to score big,” he said.

“That is why the five games in Ireland are very important as it will provide us with a chance to see how we execute our plans while chasing a big total (if that is the case). We have to be mentally prepared to chase down big totals,” he said.

“I think the bowlers need to bowl exceptionally well if they want to tie down the opponent under 300 runs. There will be exceptions when teams will be bowled out for 240 or 250 runs but I think 300 runs can be chased down in England,” he said.

“If you look at our history we don’t chase such total (over 300 runs) and one of the biggest reasons behind it is that we don’t play in such surfaces which produce such totals. So I am hoping that we can execute our plans properly in order to achieve those totals,” he said.

Tamim insisted that it won’t be easy to make that happen in Ireland considering they are not used to that condition while the wicket was quite during the last time they played.

“I think the conditions will be a big challenge because we are not used to playing in Ireland much often,” said Tamim.

“The last time we played the wicket was difficult, so I think the preparation and the practice game is very important,” he said.

“How we start the tournament is very important as there are in-form West Indies in the tri-nation too,” he said.

Tamim said that there is also a negative aspect attached to the tri-nation series as there is a chance that they could just burn themselves too much ahead of the World Cup and in order to prevent that they can think of resting some members just to keep them fresh ahead of the global tournament.

“There is only one negative aspect (of the tri-nation) and that is we will be playing thirteen to fourteen matches in one and a half months apart from that I don’t see anything else because we don’t get the chance to play in those conditions often,” he said.

”The key will be to rest people whenever someone needs rest (in Ireland),” he said.

“We all know that we cannot afford to rest in World Cup,” he said.

“In Ireland we will be playing five matches and if we opt to experiment with the squad combination after a game or two, I think it will be fine,” he concluded.