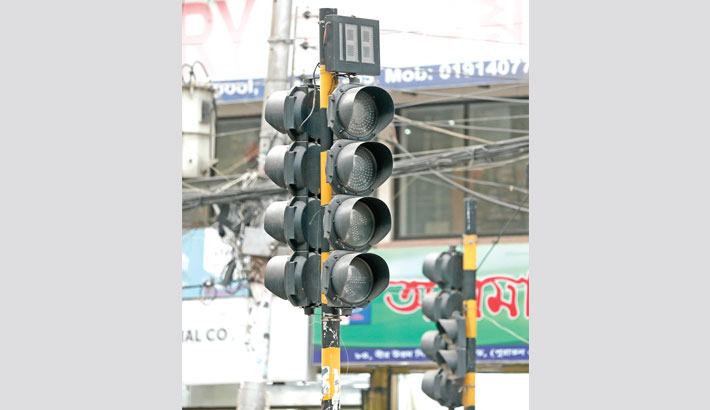 The move to digitise the traffic control system in Dhaka city for ending manual controlling has fallen flat.

A project undertaken for digitising traffic control and ensuring clean air in the capital ended on March 31 with no effective results though an allocation was made to buy 134 remote controls worth Tk 1.5 crore (15 million).

Police have attributed the failure in traffic control digitisation to technical glitches.

City corporation officials, however, said it could not introduce the system due to inaptness of traffic cops. They claimed that the cops were supplied with remote controls which they failed to use effectively.

Following suggestions of police, DSCC decided to introduce remote control of traffic signals to make digital signal system effective as the flow of traffic is not always same.

Talking to the daily sun on Thursday night, a traffic cop at Malibag rail crossing said, “Traffic lights were installed a few days ago but now it is out of order. For this reason, we are managing the traffic manually.”

Sirajul Islam told the daily sun, “We have worked on 62 traffic intersections of the capital among which, traffic signals of 20 intersections are functional while 40 are running on trial basis.”

“If traffic lights have any glitches, traffic cops can inform us and we can solve the problem,” he added.

Asked why the traffic is not being controlled digitally, he said, “We had decided to launch the system but traffic flow in different lanes are not the same, and sometimes, we have to take into account the VIP movements. Due mostly to inaptness of the traffic cops, it could be launched.”

The official claimed that they provided the traffic cops with remote controls and training how to use it, but they failed to do it.

Talking to daily sun, DMP’s additional commissioner (traffic) Mir Rezaul Alam said: “If the traffic signal lights at intersections go frequently out of order, how we can control the traffic jam digitally.

Directing the correspondent to DSCC, he said, “You better ask the city corporation why this happens.”