MD, have a taste of WASA ‘pure’ water 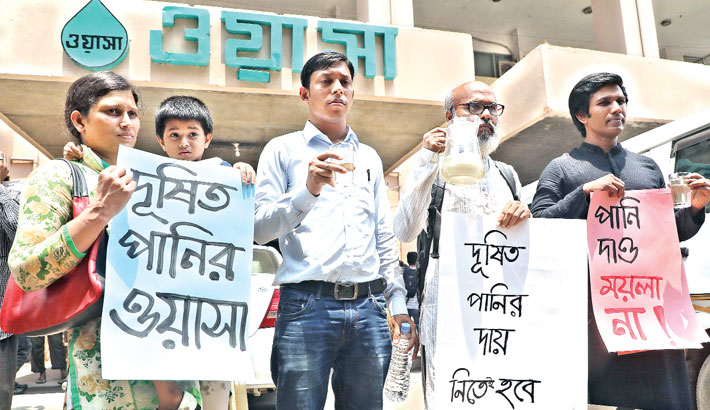 A family from the capital’s Jurain stand in front of WASA building in the capital on Tuesday, protesting supply of impure water by the state-run utility provider. The protest by the family came following Dhaka WASA Managing Director Taqsem A Khan’s claim that its water is completely pure to drink. — sun photo

With a jug and glasses of water, a pack of sugar and a few pieces of lemon in their hands, five members of a family gathered in front of Dhaka WASA office in the capital on Tuesday to protest the supply of impure water by the state-run utility provider.

In a unique way of protest, they offer the WASA managing director a glass of ‘sharbat’ made with WASA’s ‘potable water’ to drink.

The family from capital’s Jurain, led by Miazanur Rahman, prepared the drink to serve it to the WASA managing director, Engineer Tasqem A Khan.

But police and Ansar members barred them from entering the office saying that the MD was not there. The family members eventually managed to enter the office with the help of journalists.

supplied by them as he commented recently that the water is 100 per cent potable,” said protestor Mizaur Rahman standing in front of WASA building at Karwan Bazar.

Coordinator of Juranin Nagorik Odhikar Bastobayan Parisad, Mizanur Also said, “Residents of Jurain have been suffering for years as the water supplied by Dhaka WASA is polluted and unusable. The water is so dirty that it is unsuitable for drinking even after boiling.

The protest was over a comment of WASA MD Taqsem A Khan where he claimed that the water supplied by Dhaka WASA was 100 per cent potable, protestor Mizanur claimed.

The protestors also claimed that they informed WASA MD and applied with 3000 signatures in 2012 about the putrid water from WASA pipeline. “But he is yet to take any action as of now.”

Among the five protestors, wife of Mizanur, Samim Hashem Khuki and their child, family friend Matiur Rahman, a resident of Rampura attended the protest.

As Managing Director Taqsem Khan was not available to attend the protesters, WASA’s Director AKM Shahid Uddin went out to calm the protestors down.

Later, Mizanur and the protesters exchanged heated words with WASA director A K M Shadid Uddin and offered him to drink the juice, but the official refused.

WASA assured the protesters of swift steps to make sure the water supplied to Dhaka’s Jurain is safe.

“We do not believe in assurance,” said Mizanur Rahman. “We will gather more people to realise our demand for safe water in Jurain.”

“We, the people of Jurain, have been suffering from polluted water supply for a long time,” he said, demanding an apology from the Wasa MD for his remarks.

Another female protestor who joined the group said, “Let alone the drinkable water, we don’t get the usable water from WASA pipeline. We cannot use the water in chores, including cooking and bathing. Use of WASA water in bathing is causing hair fall, skin diseases and other diseases.”

He rubbished TIB’s report that said 91 per cent of Dhaka city dwellers boils the supply water from WASA to make it drinkable.

Asked WASA MD Taqsem A Khan refused to drink the juice prepared with the water supplied by his company. “Drinking water is my personal matter,” he said.