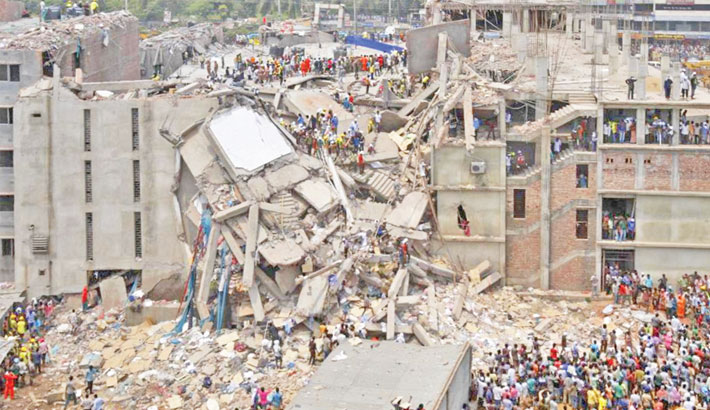 Much-expected trial in the two cases filed over the Rana Plaza collapse, which took place six years ago leaving over a thousand people dead, has been stuck for three years due to legal complexities.

At least 1,136 people were killed and another 1,169 injured in the country’s deadliest industrial disaster on April 24, 2013 at Savar, on the outskirts of the capital Dhaka.

Two courts dealing with the cases framed charges in 2016, but are yet to start recording testimonies of anyone of the 724 witnesses.

Only Sohel Rana, owner of the building that housed six readymade garment factories, is now in jail, but 32 other accused in the case have been bailed out and six are on the run.

Phantom Apparels Ltd Chairman M Aminul Islam, an accused in the building code violation case, has been exonerated from the charges.

He said recurrence of incidents like the Rana plaza collapse will not stop until the culprits are punished.

The labour right activist said the working environment has improved at garment factories after the Rana Plaza tragedy. “But it is not enough. Workers are still at a risk.”

Talukder said the Rana Plaza victims are yet to get enough compensation as per ILO Convention. “We want justice for the victims and for their families,” she added.

A source said 51 percent of the workers injured in the building collapse are still jobless.

In June 2015, the Criminal Investigation Department (CID) submitted two charge sheets — one for murder and the other for violation of building codes in the construction of the nine-storey Rana Plaza — against 42 accused, including Sohel Rana.

Sohel Rana, his parents and 34 others were charged with causing the death of the workers while four others were accused of sheltering Rana and helping him flee.

On July 18, 2016, Dhaka District and Sessions Judge Court framed charges against 41 accused persons, including Sohel Rana and his parents, in the case filed under penal code.

Court sources said the High Court issued a stay of trial proceedings of eight accused after their pleas challenging the legality of the order for framing charges in the murder case.

Later, the HC vacated the stay order of six accused, but the six-month stay order for two other accused—-M Refat Ullah and ward councilor Mohammad Ali Hossain—-yet to vacate that is why the court can not to start recording statements of any witnesses  in the last three years.

There are also allegations that the prosecution lawyers are not taking any proactive measures to dispose of the HC stay order and they are not cordial to complete the trial.

Refusing the allegation of negligence, Public Prosecutor Khandaker Abdul Mannan of the court said, “We’re waiting for the vacation of the HC order for the two accused. After that, we can start recording deposition of witnesses in the case.”

But the court is yet to start recording deposition in the case as four RMG factory owners those are also accused in the case — Aminul Islam, Anisur Rahman, Bazlus Samad and Mahmudur Rahman — submitted revisions challenging the order for framing charges against them.

According to a recent survey conducted by Action Aid Bangladesh, 51 percent of Rana Plaza survivors have remained jobless for last six years due to physical and mental weaknesses.

The rest of 49 percent workers have been engaged in various jobs and self-employment.

Action Aid Bangladesh Country Director Farah Kabir, said: “Compensation is a human right. If the compensation had been fully paid on time, the present number of incapacitated workers would have been lower.”

Dr Khondokar Golam Moazzem, research director at the Center for Policy Dialogue (CPD), said, “We had hoped that after six years, the situation would have improved. But the situation seems to have deteriorated.”