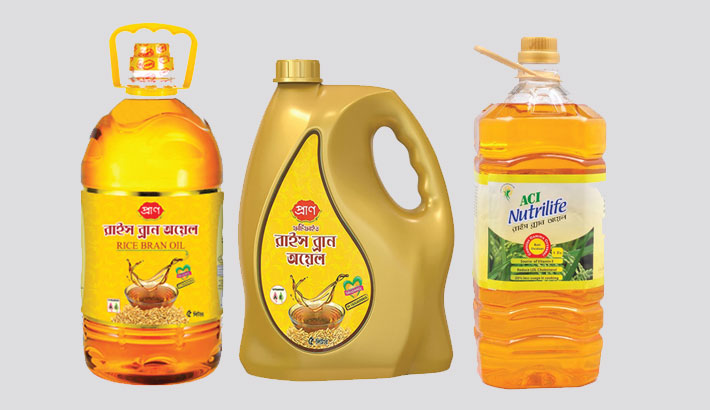 The demand for rice bran oil is growing in the country as the product contains zero cholesterol, an organic molecule found in several types of oil that many believe is responsible for heart diseases.

Rice bran oil is currently meeting around 260,000 tonnes of the total demand of 1.6 million tonnes for edible oil with the rest being met by imports of crude soybean oil and palm oils and a small percentage of refined oil.

Market sources said at least 15 Bangladeshi companies are producing the cooking oil, which is extracted from the outer brown layer of husked rice.

Businessmen said the dependence on imported editable oil will be reduced as consumers are switching to rice bran oil from soybean oil, which is enjoying the lion’s share of the market.

Bangladesh Tariff Commission estimates that the demand for edible oil will increase to 2.49 million tonnes by 2021.

According to statistics available with Tariff Commission, Mazumder Group has the highest capacity of producing 48,000 tonnes per year while KBC Agro has 30,000-tonne, Emerald 18,000-tonne, Rashid Oil Mills 18,000-tonne, Abdul

Mazumder Group has been the pioneer in the sector by starting production of the oil commercially in 2012. It was followed by Rashid Oil Mills and KBC.

“The raw materials for producing the oil are available in the country. This will reduce the dependency on imported edible oil,” he said.

He sought government policy support for the producers to further popularise the oil.

Exporters shipped more than 20,000 tonnes of rice bran oil for the second consecutive fiscal year in 2017-18.

They exported the item to at least 12 countries, including India, the US, the UK, Australia and Japan.

A study by the Bangladesh Tariff Commission (BTC) said that the industry needs about 13 lakh tonnes of rice bran to produce the oil against the demand in the market. But the sector is not getting the required amount of bran.

The study also said conversion of manual rice mills to auto and semi-auto rice mills will increase the production of rice bran, helping the oil industry to produce the oil against its demand in the market.