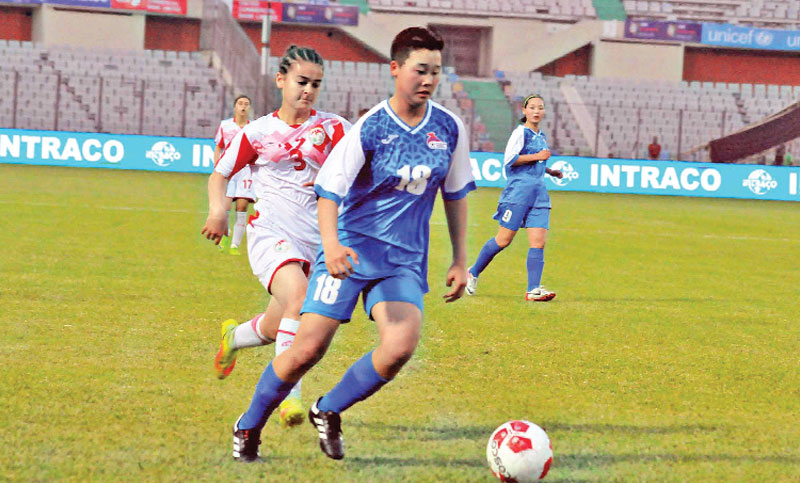 Players of Tajikistan U-19 National Football Team and Mongolia vie for the ball during their Bangamata Women’s U-19 International Gold Cup Football tournament at Bangabandhu National Stadium in the capital on Tuesday. Mongolia won 3-0. — BFF Photo

Mongolia Under-19 Women’s Football Team outplayed Tajikistan by 3-0 goals in their Group A encounter Bangamata Women’s U-19 International Gold Cup Football at Bangabandhu National Stadium in the capital on Tuesday.

The youngsters put on a display of brilliant football as Mongolia took their chances and earned success all the while Tajikistan eves showed excellent football skills.

Both the teams started the match on equal footing and launched multiple scathing attacks at each other’s D-box.

The girls in Blue broke the deadlock on the 13th minute courtesy of Undral Tuvshinjargal as she headed a corner kick into the nets of Tajikistan off a right wing corner of forward Delgerzaya Nyamsuren.

Finally, Mongolia doubled the deadlock on the 28th minute of the match as their ace forward Enkhmargad Enkhbaatar angled in a crawler beyond the reach of Tajikistan goalie Shukronai Azimzoda’s right hand. Enkhmargad’s fellow forward Lora Tom sent a bending through pass to Enkhmargad and she blasted the crawler from some 30 yards from the bar hailing from the left wing.

On the 67th minute, Mongolia advanced their lead claiming a penalty goal as their forward Delgerzaya Nyamsuren netted a goal after Tajikistan defenders overdid it with the referee in their appeal for a foul by Mongolia forward Enkhmargad.

Earlier on Monday, Hosts Bangladesh thrashed United Arab Emirates by 2-0 goals in their opening match of Bangamata Women’s U-19 International Gold Cup Football tournament at Bangabandhu National Stadium in the capital on Monday.

Young eves started off in scintillating fashion as Sirat Jahan Shopna gave Bangladesh the lead in just the 12nd minute of the match.

Bangladesh dominated the match completely but they wasted most of the opportunities. Footballer Krishna Rani Sarker got another an opportunity in the 14th minute but missed to score.

Krishna scored the second goal for the team in the 30th minute.

However, the first half goals of Sirat Jahan Sapna and Krishna Rani Sarkar helped the pre-tournament favorites getting full three points in their first assignment.

Six nations are taking part in the competition. Bangladesh will play against Kyrgyzstan on April 26 in the remaining group B match.

Six U-19 women’s teams, including Bangladesh will compete in the tournament. The teams have been divided into two groups. Group A consists of Mongolia, Tajikistan and Laos while Group B comprises UAE, Kyrgyzstan and Bangladesh.

The final is scheduled for May 3.