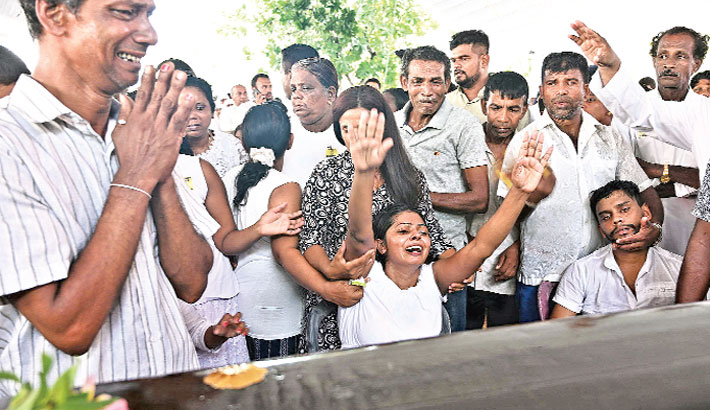 Relatives mourn beside a coffin of a bomb blast victim during a funeral service at St Sebastian's Church in Negombo on Tuesday, two days after a series of bomb attacks targeting churches and luxury hotels in Sri Lanka. – AFP PHOTO

“We haven’t felt this sad since the war,” said 36-year-old Rashmi Fernando, referring to the civil conflict that ravaged the country until a decade ago.

“I lost three cousins in the attack and another one is in ICU,” said Fernando, who was attending a service at the heavily damaged St Sebastian’s Church in Negombo with her daughters, aged three and eight.

“We’re here to pay our respects and pray that my injured cousin will recover.”

At least 321 people were killed by suicide bomb blasts on Sunday that ripped through three hotels and three churches as worshippers attended Easter services.

On Tuesday, they were remembered with three minutes of silence that started at 8:30 am (0300 GMT), when the first of the bombs detonated. Inside St Sebastian’s, evidence of the blast was everywhere, with shattered religious statues and smashed pews littering the floor. Services were held in the grounds, where more than a thousand people gathered by mid-morning to remember the victims.

The atmosphere was heavy with grief.

As the first flower-topped coffin containing the body of a woman was brought in, her elderly husband wept uncontrollably.

Some 22 people had been buried in separate coffins by midday Tuesday, laid to rest side-by-side in a sandy patch of church land.

Around a dozen cemetery workers and three mechanical diggers toiled tirelessly in the hot sun, excavating more graves for the bodies to come. Against a wall were stacked three crosses, numbered 23, 24, and 25.

“We’re expecting around 30 bodies to come today,” Father Suranga Warnakulasuriya, 32, told AFP. “The situation is so bad. Yesterday I went to a house and there were seven bodies. As a Catholic priest, I have not experienced this kind of situation in my lifetime.” Bhashina Kularathna, 16, and her four siblings placed lit candles on top of some of the graves. “We don’t know who is buried here but they are all our brothers and sisters,” she told AFP.

More people are believed to have died in the blast at St Sebastian’s than at any of the five other attack sites, with the local hospital receiving more than 100 bodies.

Security was tight after another explosive found by police detonated near the church before the bomb squad could defuse it.

Black and white banners were hung along the street leading to the church, a symbol of mourning in Sri Lanka.

Sadhurshrini Sivakumar, a 16-year-old schoolgirl, said she had come to pay tribute to the victims.

A Hindu, she visited the church often because it is near her house.

“I liked going to the church, I found it relaxing,” she said.

“Being here, I feel very sad,” she added, “I feel afraid living so nearby.”

Father Jude Fernando, the church’s chief priest for the last five years, was at the scene when the blast happened.

“It’s beyond words to explain what happened,” he said.

“It’s the first time I heard a sound like that. I saw people screaming, injured, bodies (on the ground).”

He said the church had suffered extensive damage and no one would be allowed inside for now.

“I urge people to continue to pray,” he said.