Gorillas pose for selfie with rescuers 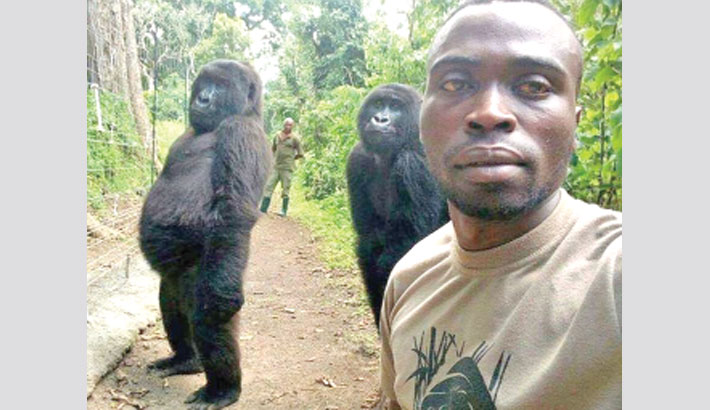 Two gorillas have been photographed posing for a relaxed selfie with the rangers who rescued them as babies.

The image was taken at a gorilla orphanage in Virunga National Park, DR Congo, where the animals were raised after poachers killed their parents. The park’s deputy director told BBC Newsday that they had learned to imitate their carers, who have looked after them since they were found.

The gorillas, he added, think of the rangers as their parents. Innocent Mburanumwe, deputy director of Virunga,  told the BBC that that the gorillas’ mothers were both killed in July 2007.

The gorillas were just two and four months old at the time.

Shortly afterwards, they were found and taken to Senkwekwe Sanctuary in Virunga, where they have lived ever since.

Because they’ve grown up with the rangers who rescued them, Mr Mburanumwe added, “they are imitating the humans” - and standing on two legs is their way of “learning to be human beings”.