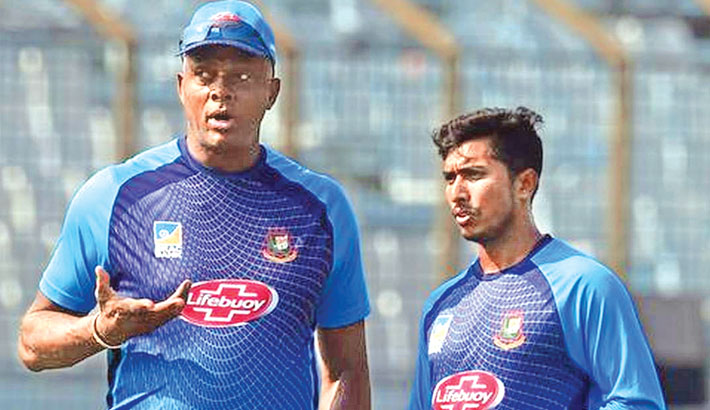 Bangladesh pace bowling coach Courtney Walsh said on Monday that they are concerned about their injured pace bowlers ahead of the World Cup.

Three leading fast bowlers-Mustafizur Rahman, Mohammad Saifuddin and Rubel Hossain are carrying niggles and according to the legendary West Indian great now they are planning how to get them back into the park and make them match fit.

Mustafizur sprained his ankle warming up for a Dhaka Premier League match on April 10 to join a growing injury list which also includes batsman Mahmudullah Riyad as well.

Rubel had a side strain that prevented him to take part for the most part of the Dhaka Premier League while all-rounder Saifuddin is advised to remain inside the 30-yard circle during the league as his faces a race against time as he tries to prove his fitness ahead of the World Cup in England later this year.

Saifuddin’s recuperation was somewhat scuppered after he opted to play in the Dhaka Premier League for his side Abahani Ltd instead of getting his injured right elbow looked at.

Bangladesh started their preparation for the tri-nation of Ireland on Monday at the Sher-e-Bangla National Stadium in the capital with only five cricketers- Tamim Iqbal, Mahmudullah Riyad, Mushfiqur Rahim, Rubel Hossain and Mustafizur Rahman as others are involved with their respective clubs for taking part in the DPL apart from Shakib Al Hasan, who is currently fulfilling his duty in the IPL with Sunrisers Hyderabad.

“It is the first day of practice. Some of the guys are still playing competitive cricket, which is good for them. Those who are not playing are in the camp today (Monday),” Walsh told reporters after the opening day session.

“There are few injury worries and some who didn’t get a chance to bat so I think it is a good opportunity for them to get a long hit in the nets. It is a good start but the main concern for me is the injured bowlers. We have to get them back on the park, and be match fit,” he said.

“Out of the five we have three injured – Fizz, Rubel and Saifuddin who has the tennis elbow. We need to get them back into bowling, within the right frame of mind, and be sharp enough to do a bit of bowling in Ireland and be ready for the World Cup,” he said.

“We have Taskin, Khaled and Shafiul as well. You can probably say that we have them just in case we need them,” he added.

Walsh added that they need to be very careful regarding using Mustafiz as he believes over rushing him can make them pay in the World Cup considering he has career had a long association with injuries.

“He (Mustafizur) has got a big role to play in the World Cup, once he is fit. But I don’t think we rely on any one player. Shakib, Mashrafe and Rubel have been consistent. Fizz hasn’t been as sharp since his injury, and he keeps picking up slight niggles. A fully fit Mustafizur can win games for you but we have to have him as fit as possible,” he said.

“We have a bit of time on our side. My concern is that I hope we don’t over-rush him, and probably use him too much in Ireland, and he is not fresh for the World Cup,’’ he commented about Mustafizur who also added that he is hopeful Saifuddin as he feels he can also leave a mark in the World Cup,” Bangladesh coach added.

“He has come along tremendously. He has bowled very well. He is a very excitable all-rounder. His form in the domestic tournament has been very good. His confidence is quite good. He is keen to do what he is doing. If we can get him fully fit with the tennis elbow being solved, it will be a big plus for us as well,” he said.

Walsh believes that variations will be a key factor for the bowlers as the wicket in the World Cup will be batting friendly while he added that they need to assess the condition intelligently.

“It will be a big challenge. The World Cup is going to be a long tournament. There are going to be some good cricket wickets, which are batting-friendly. We have to be intelligent, and try to execute well,” he said.

“We have to read the conditions and the surfaces we play. Some places the ball might swing more than others. We have to assess when we get there. Most of the wickets will be docile and flat,” said Walsh.

“We have to work on our variations and execution. Everybody studies one another these days, so they know our strengths and weaknesses. Likewise, we also know theirs. So it is about execution on the day, and tries to be smart,” he said.

“Variations, thinking clever and execution has to be the key parts. Back whatever strength you have. You have to utilise early, to take early wickets which contains run rate and put pressure on the batting team. It will be a combination of all of that, and assessing the wicket. Once we know who are playing in the XI, we will make them focus on their strengths,” he added.

“It will be very, very tough. We have to win a couple of early games, to get the momentum to carry. Every team on this day, in this World Cup, can be dangerous,” he concluded.