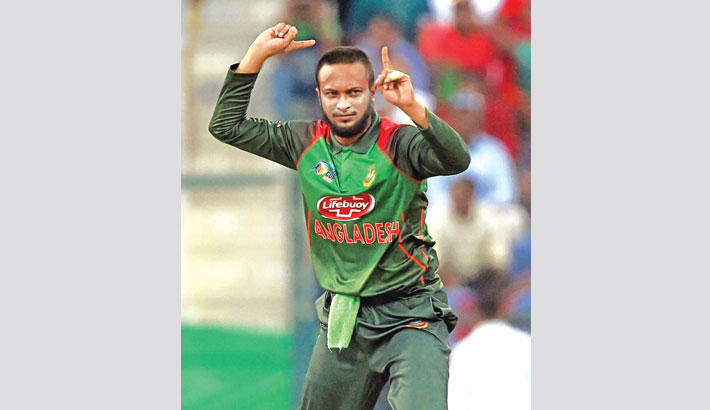 The ace Bangladesh all-rounder was expected to join the national team’s World Cup preparatory camp, starting from April 22 as he was not playing regularly for Sunrisers.

Earlier, BCB had sent a letter to Shakib informing him of the training camp and he initially confirmed that he will join the camp from April 23 but recently he had informed BCB that he wanted to stay back as he has got a scope to play in the IPL.

The all-rounder, who has recovered from a finger injury which prevented him from joining the national team for the tour of New Zealand, was earlier granted a no-objection certificate to make himself available for Sunrisers Hyderabad (SRH) in the ongoing Indian Premier League (IPL) but the presence of stalwarts like David Warner, Jonny Bairstow and Kane Williamson only prevented him from getting selected in the playing XI.

However with the departure of Bairstow, an opportunity opened for Shakib that according to BCB officials he wants to seize.

“He was expected to arrive on April 23 but now that is not happening,” BCB cricket operation chairman Akram Khan told daily sun on Monday.

“He had informed us that as someone had left for Sunrisers there is a chance that he might play and so he wanted to stay back. We have given him the permission as we believe if he can play it will always be good for him leading up to the tri-nation in Ireland,” he said.

“In that case he will join us ahead of our departure for the tri-nation in Ireland,” he added.

Bangladesh pace bowling coach Courtney Walsh believes staying in IPL can make him sharper provided he get some match under his belt.

“Well he is in India with his IPL team and I think it’s good for him to be there to get some match practice if he can. Unfortunately for us he hasn’t played many games as yet. We are still hopeful that he plays,” said Walsh.

“I think the atmosphere there and probably the conditions it’s good for him to be there if he is going to get a game or two before. Because I think that match fitness for him right now is the key. He was injured; he was practicing for quite some time. Personally I would like him to play a couple of games in the IPL to get a bit sharper for of the World Cup,” he said.

“I think everybody understands. For me even if the vice-captain comes here and practice I don’t think that it’s going to be that intense if he played in one or two IPL games. So, I don’t have a problem with him staying there and playing. And if he can get a couple of games before we get to Ireland it would be good for him. And if not the sooner we can get him in Ireland the better it is for him and the team,” he added.

Bangladesh will leave for Ireland on May 1 for the tri-nation that is scheduled to start for May 5 with West Indies being the other team in the tournament.