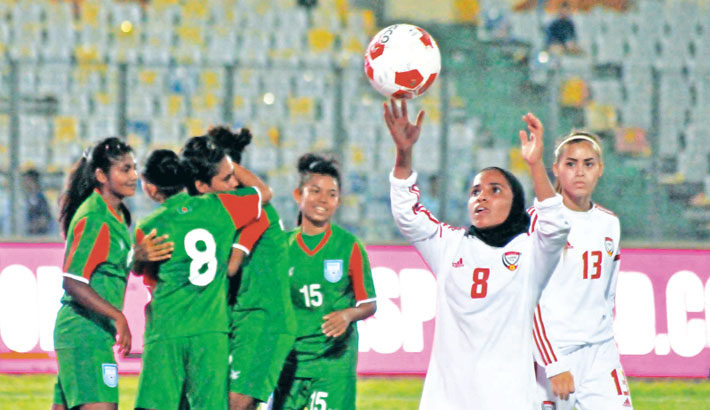 Players of Bangladesh U-19 National Football Team celebrate after scoring a goal against United Arab Emirates during their Bangamata Women’s U-19 International Gold Cup Football tournament at Bangabandhu National Stadium in the capital on Monday. – BFF PHOTO

Hosts Bangladesh thrashed United Arab Emirates by 2-0 goals in their opening match of Bangamata Women’s U-19 International Gold Cup Football tournament at Bangabandhu National Stadium in the capital on Monday.

Young eves started off in scintillating fashion as Sirat Jahan Shopna gave Bangladesh the lead in just the 12nd minute of the match.

Bangladesh dominated the match completely but they wasted most of the opportunities. Footballer Krishna Rani Sarker got another an opportunity in the 14th minute but missed to score.

Krishna scored the second goal for the team in the 30th minute.

However, the first half goals of Sirat Jahan Sapna and Krishna Rani Sarkar helped the pre-tournament favorites getting full three points in their first assignment.

Six nations are taking part in the competition. Bangladesh will play against Kyrgyzstan on April 26 in the remaining group B match.

Earlier on Sunday, the trophy unveiling ceremony of Bangamata U-19 Women’s International Gold Cup 2019 was held at a hotel in the capital.

She expressed her joy for arranging the tournament for women footballers, named after Sheikh Fazilatunnesa Mujib.

Bangladesh Football Federation and K-Sports are jointly organising Bangamata U-19 Women’s International Gold Cup 2019 to celebrate Fazilatunnesa Mujib’s life and ideals. It will be the first international football tournament for women arranged by BFF after 2004.

Six U-19 women’s teams, including Bangladesh will compete in the tournament. The teams have been divided into two groups. Group A consists of Mongolia, Tajikistan and Laos while Group B comprises UAE, Kyrgyzstan and Bangladesh.

The final is scheduled for May 3.