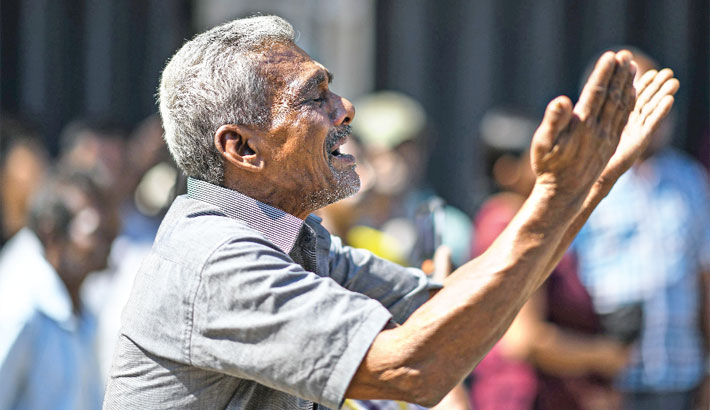 A man cries as he prays outside the St. Anthony's Shrine in Colombo on Monday, after the building was hit as part of a series of bomb blasts targeting churches and luxury hotels in Sri Lanka. —AFP PHOTO

COLOMBO: Religious and world leaders have condemned a series of blasts in Sri Lanka that killed at least 290 people on Sunday, including dozens of foreigners with British, Dutch and American citizens believed to be among them, reports AFP.

Here is a summary of the reactions:

Pope: ‘Cruel violence’—Pope Francis expressed his sadness over the attacks during his traditional Easter address at the Vatican.

“I want to express my affectionate closeness with the Christian community, attacked while it was at prayer, and to all the victims of such cruel violence,” he said.

“New Zealand condemns all acts of terrorism, and our resolve has only been strengthened by the attack on our soil on the 15th of March.

US: ‘Ready to help’—US President Donald Trump tweeted: “Heartfelt condolences from the people of the United States to the people of Sri Lanka on the horrible terrorist attacks on churches and hotels.

“We stand ready to help!”

Australia: ‘Terrorist attack’: Prime Minister Scott Morrison said in a statement: “Our heart goes out to those Christians and all of those other innocents who have been slaughtered today in this horrific terrorist attack.”

Europe: ‘Sad day for the world’—EU Commission chief Jean-Claude Juncker expressed his “horror and sadness” at the blasts, while EU foreign policy chief Federica Mogherini said the attacks marked “a truly sad day for the country and for the world”.

In Paris, the lights on the Eiffel Tower were dimmed in tribute to the victims.

German Chancellor Angela Merkel said in a statement published on Twitter that “religious hate and intolerance that have showed themselves in such a terrible way today must not win”.