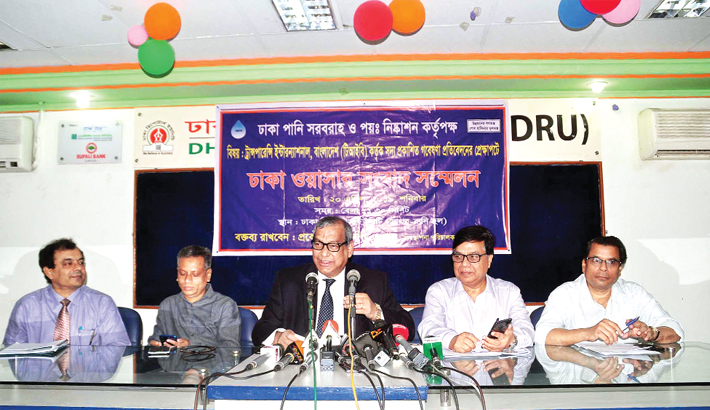 Dhaka WASA managing director (MD) Taqsem A Khan termed the findings of the research of the anti-graft body TIB as low quality, sweeping and one-sided to get cheap popularity.

He said, “It is not professional research findings, it has become like a report”.

The WASA MD came up with the rejection while talking at a press conference at Dhaka Reporters’ Unity in the capital.

But we have found less work has been done on the first topic where they did specific institutional limitations and challenges.

The result they have made public under bold underline is one sorts of publicity. Observing the strategy and approaches about the three specific issues on their research, they were limited within one issue.

It is based on perspective but not a scientific basis. In most cases, it commented on sweeping manner that can not be generalised. We have declared a vision 2021 coincided with the government turn around Dhaka WASA in 2010. The research report did not detail about the progress and challenges of our vision.

The report of gas worth Tk 330 crore has been burnt to boil the supplied water to make drinkable thus wasting the national resources is highly hypothetical. How they estimated the cost, the Md posed the question asking for the scientific basis.

They don’t focus our many successes including 100 percent billing system, bringing down system loss.

In terms of Meter reading, we have brought about epoch making that was not referred. We have launched online and real time online to curb corruption. We are going to fully automation system very soon, the MD said.