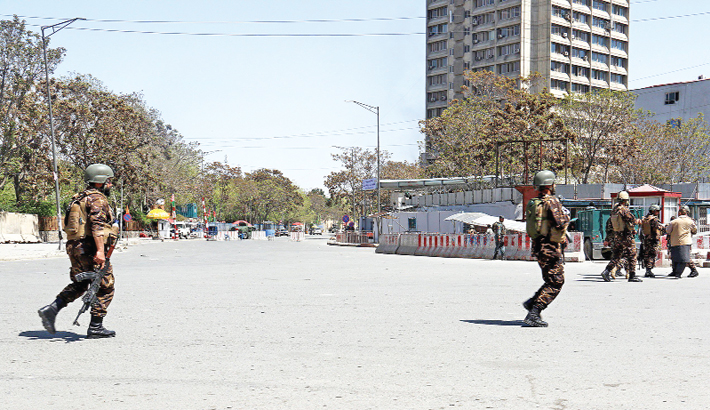 Afghan security personnel stand guard near the communication ministry in central Kabul as suicide bombers and gunmen launched an attack near the ministry on Saturday in an ongoing assault that destroyed weeks of relative calm in the capital. —AFP PHOTO

KABUL: Suicide bombers and gunmen launched an attack near a government ministry in central Kabul on Saturday, officials said, in an ongoing assault that destroyed weeks of relative calm in the capital, reports AFP.

The attack near the communications ministry occurred one day after planned talks between the Taliban and Afghan representatives were cancelled.

No one claimed immediate responsibility for the assault, which left people stranded in the tall building. Six people were injured, according to a health ministry spokesman.

Initial reports were confused, with officials from different agencies saying three or four attackers were involved. It was not clear how many were suicide bombers and how many were gunmen involved in a follow-up assault.AFP journalists heard one big blast at around 11:40 am (0710 GMT), followed by sporadic gunfire for more than an hour afterward.

“The information that we have is four attackers have placed themselves near the communication ministry and are engaged in gun battles with the Afghan security forces,” Amanduddin Shariati, a security official in Kabul told AFP.

On Twitter, the Ministry of Information said three suicide bombers had attacked a post office building at the communications ministry.

General Sayed Mohammad Roshan Dil, the Kabul police chief, said four attackers had been wearing police uniforms and had targeted a shrine near the ministry. One of the attackers was killed, he told Tolo.

Local television footage showed a small plume of smoke near the ministry, and people climbing out windows on a lower level.

On Facebook, a man named Syed Jaillani Jallan said he was trapped inside the ministry.

“Please pray for us as the enemy has reached very close to us. Suicide attack on communication ministry,” he wrote. AFP could not immediately verify the comment.The communication ministry is located in downtown Kabul, about two kilometres (1.25 miles) from the green zone, a heavily fortified foreign compound. It is the city’s main commercial area and is home to a large hotel.

The ministry itself is an 18-storey building, thought to be the tallest in Kabul.