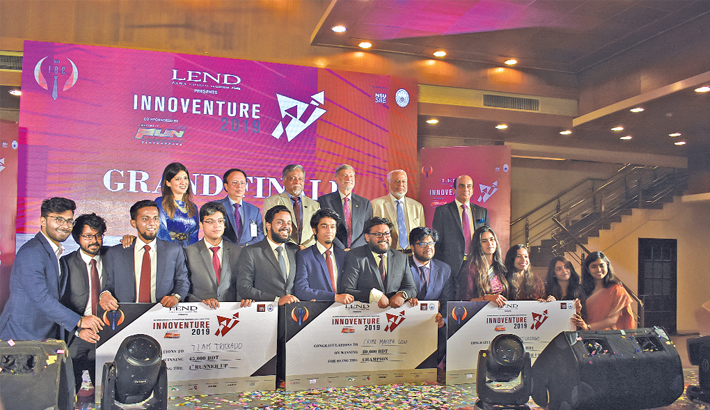 The grand finale of North South University International Business Club’s case competition Innoventure 2019 was held on 17 April. After three intense rounds of grueling competition and outstanding performances, from 274 teams and 30 Universities from all over the country, the top 5 teams made it to the grand finale and prize giving ceremony.

The competition was designed to give participants relevant knowledge on key drivers of the international industry and a better perspective on how real-world businesses are planned. This event was not just a business competition but a platform to all the eligible minds to develop and learn.

The chief guest of honour present at the finale was Planning Minister Muhammad Abdul Mannan. The session was also chaired by the Vice Chancellor of North South University Prof. Atique Islam and the special guests included the Pro-Vice Chancellor and Dean of School of Health and Life Sciences Prof. Dr. G.U. Ahsan and members of the Board of Trustees of North South University Mr. M. A. Kashem and Mr. Benajir Ahmed with the director of student affairs, Ms. Parisa Shakur. After their respective speeches, Prof. Atique Islam presented the honorary crest to Muhammad Abdul Mannan for his presence.

The winners of Innoventure 2019 were then announced by Parisa Shakur. Crime Master Gogo from North South University became the champion winning BDT 80,000 while TEAM TRICKADO also from North South University took runners-up with BDT 45,000 and CHOTURONGO from Institute of Business Administration became second runners-up with BDT 25,000. They were presented their prizes by the respective guests.