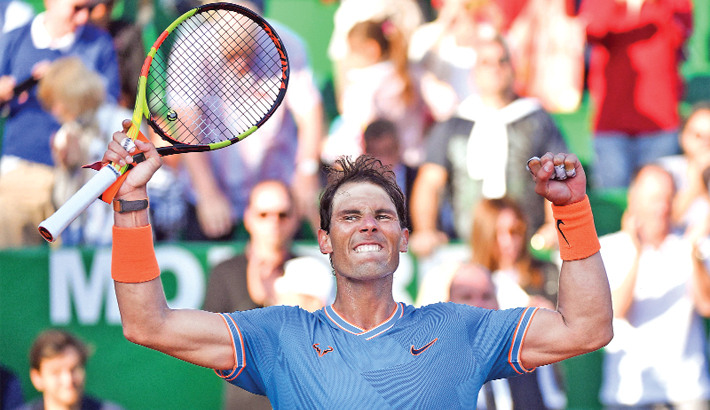 World number one Novak Djokovic was dumped out by Daniil Medvedev while Rafael Nadal survived a struggle to reach the semi-finals of the Monte Carlo Masters for the 14th time on Friday.

Djokovic, twice a champion in the principality, lost serve five times in a 6-3, 4-6, 6-2 defeat by Russia’s 10th seed Medvedev.

Nadal, an 11-time winner of the event, rallied from 4-1 down in his opening set before finally overhauling potential Argentine spoiler Guido Pella 7-6 (7/1), 6-3.

For Djokovic, who won a record seventh Melbourne title in January, defeat marked another premature exit.

The Serb, who has won the last three Grand Slam events and could conclude a personal sweep with another title at Roland Garros in June, feels that all he needs is more court time and some extra polish.

“The French Open is the ultimate goal on clay. It’s expected in a way for me to peak right at that tournament, because that’s what I’m aiming for,” Djokovic said.

Djokovic was broken three times in the final set, clawing one back but exiting when Medvedev drove a backhand into the far corner on match point.

Nadal toiled away for two hours, 20 minutes to win for the 71st time in 75 matches at the tournament.

“It was a very tough match,” Nadal said. “Luckily I was able to come back (from 4-1 down) in the first set. If he had gone 5-1 it may have been almost impossible.

“It was a physically and mentally draining set, especially losing my first three service games.

“I was lucky to escape, I’m happy to be through.”

The first set featured eight breaks of serve before Nadal won it in a tiebreaker.

He served for the match leading 5-2 in the second only to drop serve again, but recovered to take the win as Pella double-faulted.