Over 1 lakh affected across country in four months 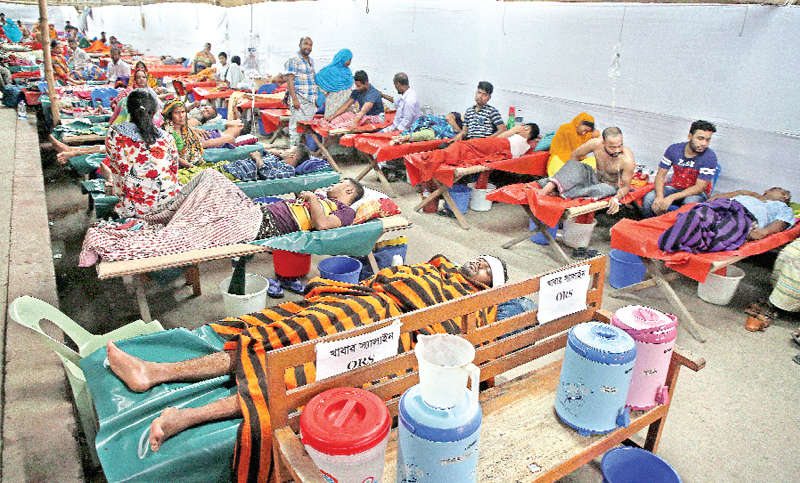 A large number of diarrohea patients are undergoing treatment in icddr,b hospital at Mohakhali in the capital. The photo was taken on Wednesday. — sun photo

Diarrhoea has taken a serious turn in the capital and other parts of the country amid sweltering summer heat as around a thousand people with diarrhoeal disease are being admitted to hospitals every day.

Intake of contaminated water and unhygienic food is the major reason for the outbreak of the water-borne disease, they said.

About 113,669 patients have been affected by diarrhoea in 95 upazila areas of 10 districts from January 1 to April 18, according to a report by Health Emergency Operations Centre and Control Room at the Directorate General of Health Services (DGHS).

“The number of diarrhoea patients has increased across the country this summer,” Borhan Uddin, duty officer at the Health Emergency Operations Centre and Control Room, told the daily sun.

“Diarrhoea cases have increased suddenly due to the intake of contaminated water, unhygienic food,” Azharul Islam, head of hospital and chief scientist of the icddr,b, told the daily sun on Wednesday.

He said around 900 diarrhoea patients are being admitted to the hospital every day.

Sources said icddr,b has been overflowed with  diarrhoea patients.

During a visit to the ICDDR’B, it was seen that doctors were struggling to tackle the situation while flow of patients was increasing.

In the first half of April, ICDDR,B provided treatment to 11,751 diarrhoea patients.

On April 16, a record number of 923 diarrhoea patients were admitted to the ICDDR,B.

However, the hospital authorities fear that the number of diarrhoea patients may increase in days to come.

The beds of diarrhoea patients are overflowed at ICDDR’B while patients spread to the hospital lobby, study area and corridors.

Azharul Islam of ICDDR,B advised people to drink safe water and maintain hygiene in a bid to remain safe from diarrhoea and asked people to consult doctors immediately in case of emergency.

Sweltering hot weather is prevailing across the country soon after the beginning of Baishakh.

Normal life is being hampered as the intensity of hot has increased across the country.

“People are feeling more heat than the recorded temperature because of formation of a trap on cooling system in the environment due to higher humidity,” meteorologist Hafizur Rahman said.

“At this moment, many children affected by diarrhoea, viral fever and chicken pox are taking treatment at Out Patient Department of Dhaka Shishu Hospital every day.”

Around 50 percent of patients affected by chicken pox are coming to the hospital from March,” Syed Shafi Ahmed Muaz, Director of Dhaka Shishu Hospital, told the daily sun.

Amirul Hassan, director of Kuwait Bangladesh Friendship Government Hospital at Uttara, said the hospital is providing treatment to an increased number of patients affected by diarrhoea, typhoid and pneumonia in April.