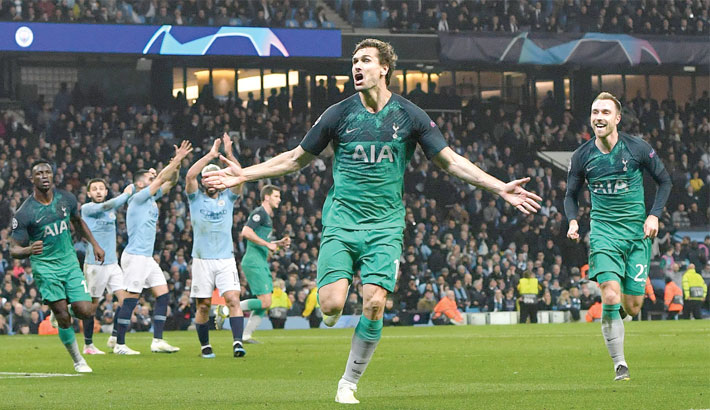 Manchester City’s bid for an unprecedented quadruple of trophies ended in dramatic fashion as Tottenham progressed to the Champions League semi-finals on away goals as a pulsating 4-3 win for City on Wednesday was not enough to overturn their 1-0 first leg deficit.

Four goals were scored in a crazy opening 11 minutes as Raheem Sterling and Bernardo Silva cancelled out two Son Heung-min away goals for Tottenham.

City finally looked set for the last four when further goals from Sterling and Sergio Aguero put them ahead in the tie for the first time.

But there was a further twist when Fernando Llorente’s controversial goal 17 minutes from time was allowed to stand despite a VAR check for handball by the Spaniard.

VAR intervened again deep into stoppage time to save Spurs once more when Sterling thought he had completed his hat-trick only for Aguero to be ruled offside in the build-up.

Tottenham’s reward is a semi-final clash against Ajax.

Pep Guardiola will face more questions over his failure to land the Champions League three seasons into his City’s reign, but after a more conservative approach for the first leg was criticised, he set the tone for a thrilling 90 minutes.

Kevin de Bruyne was restored to the starting XI among four changes from the first leg and the Belgian showed why the decision to leave him out last week was so questioned.

De Bruyne drove at the heart of the Spurs defence before feeding Sterling, who cut inside and curled a wonderful shot into the far corner.

Guardiola had called for the home fans to finally produce an intimidating atmosphere on a European night at the Etihad.

However, they had barely retaken their seats by the time Tottenham were level.

Aymeric Laporte cut out Dele Alli’s forward pass, but only turned the ball into the path of Son, whose shot had too much power for Ederson.

Three minutes later, City’s quadruple quest appeared in tatters as Laporte was again caught in possession, this time by Lucas Moura and the Brazilian teed up Son to curl into the top corner for his 20th goal of the season.

Yet, a kamikaze opening 11 minutes had another twist as Bernardo’s effort deflected off Danny Rose and wrong-footed Hugo Lloris at his near post.

By the midway point of the first-half, City were back in front as Bernardo and De Bruyne played creators once more and Sterling finished off a low cross at the back post.