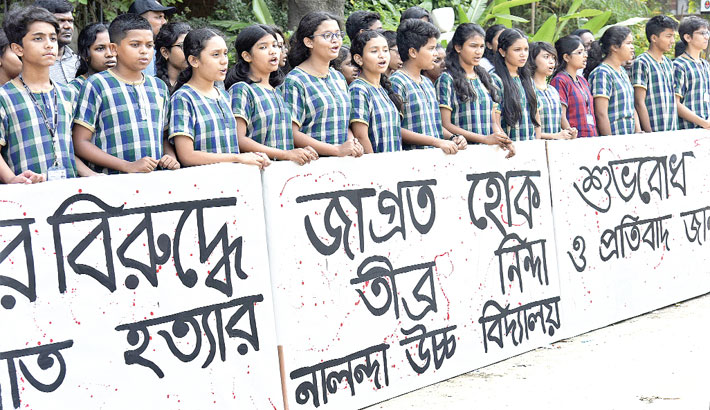 Students of Nalanda High School form a human chain in front of the Chhayanaut building in the city’s Dhanmondi area on Thursday demanding justice for Nusrat Jahan Rafi. —SUN photo

Hafez Abdul Quader, another accused of madrasa student Nusrat Jahan Rafi murder case, has confessed to their involvement with the killing.

While giving statement before a court of Senior Judicial Magistrate Sharaf Uddin Ahmed on Thursday afternoon, Quader admitted that they made a plan to kill Nusrat at his room of the madrasa hostel.

Investigating officer of the case said Quader was among the planners of Nusrat’s killing and he guarded the main entrance of the madarsa during the gruesome incident on the roof of the madarsa’s administrative building.

On April 6, five students of Sonagazi Senior Fazil Madrasa set Nusrat on fire as she refused to withdraw the case filed against the principal of the madrasa Siraj-ud-Daula for sexually harassing her on March 27.

On April 10, she succumbed to her injuries at Dhaka Medical College Hospital’s burn unit.