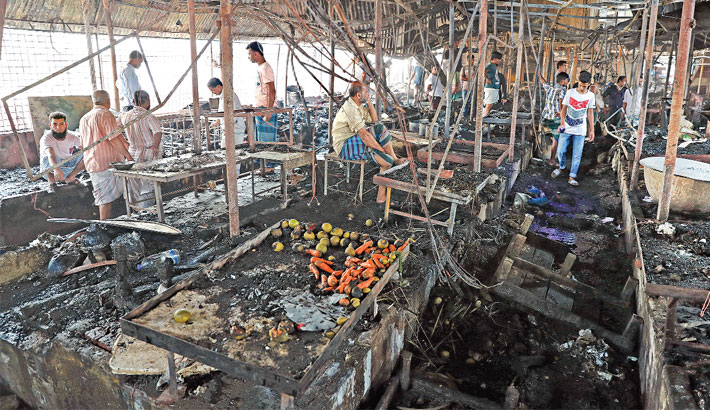 Perplexed traders are seen sitting or walking through the debris after the devastating fire at Malibagh kitchen market in the city on Thursday. — Reaz Ahmed Sumon

A devastating fire broke out at Malibagh kitchen market in the capital on Thursday morning.

The fire gutted 260 out of 300 shops of the market, said Mohammad Nurul Haque Nuru, a member of the market committee.

According to sources at fire service control room, the fire broke out around 5:30 am. On information, 14 units of firefighters rushed to the spot to bring the blaze under control. Finally, the fire was brought under control around 6:35 am following frantic efforts of the fire fighters.

However, the reason behind the blaze could not be known immediately after the incident.

During a spot visit, this correspondent found many traders wailing while others were seen searching the debris.

A trader, Abdul Malek, informed that he had brought spices worth Tk 3 lakh ahead of Shab-e-Barat, but the fire burnt everything.

Mohammad Mamun, a rice seller, lamented saying the fire gutted rice worth about Tk 15 lakh of his shop.

A grocer named Nadim informed that the blaze destroyed everything of his shop.

He said, “The traders won’t be able to turn around if they do not get government assistance.”

Amzad Hossain, a meat seller, informed that he had brought 18 goats ahead of Shab-e-Barat, but the goats roasted alive.