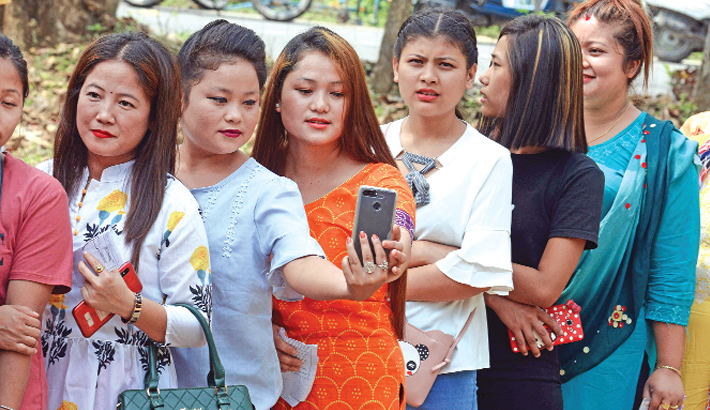 Indian voters take a selfie in the queue to cast their vote at a polling station in Rohini village some 27km from Siliguri in West Bengal on Thursday, during the second phase of the mammoth Indian elections. —AFP PHOTO

NEW DELHI: Voters across India cast ballots on Thursday in the second round of the country’s mega elections, amid more violence including a clash between protesters and security forces in tense Kashmir state.

More than 157 million of India’s 900 million voters are eligible to cast ballots on the second of seven days of voting in the world’s biggest election, reports AFP.

Prime Minister Narendra Modi is seeking a second term but faces a stiff challenge from the opposition Congress party, which is hoping to capitalise on Modi’s lacklustre economic record. Authorities have ramped up security across the 95 constituencies voting Thursday, including restive Kashmir.

Three people were injured in the state’s main city Srinagar after security forces opened fire on protesters with shotgun pellets and live bullets, a police officer told AFP on condition of anonymity.

A day earlier, a female poll worker was gunned down in the eastern state of Odisha by suspected Maoist rebels hours before voting started, media reported.

And in central Chhattisgarh state, security forces raided a Maoist jungle camp, killing two insurgents allegedly involved in an attack on an election convoy before the first round of voting that left five dead, police said.

Tens of thousands of troops, paramilitaries and police have been deployed to Kashmir for the vote, and at many polling stations security forces outnumbered voters.

Kashmir surged into Modi’s campaign after a February suicide bomb attack that killed 40 paramilitaries and brought India and Pakistan—which both control part of divided Kashmir—to the brink of war.

Voters trickled into polling stations Srinagar, with officials saying turnout was less than six percent in parts of the city by mid-afternoon.

“I hope whoever is elected this time will help get my son a job,” one male voter told AFP, declining to give his name.

Outside another station, a 55-year-old man said he would not vote. “Our leaders have called for the boycott of all Indian elections,” he said.

Modi is still seen as the favourite but he faces an increasingly tough challenge from opposition Congress party leader Rahul Gandhi.

He was also caught up in a firestorm Thursday over an election official who was suspended after he insisted on searching Modi’s helicopter. The election commission said the search violated their rules on VIPs, but the Congress party slammed the decision on their official Twitter account.

“What is Modi carrying in his helicopter that he doesn’t want India to see?” the party asked.

Thousands of candidates from more than 2,000 parties are competing for 543 seats in parliament. The last vote is on May 19 and final results will be released on May 23.

At a college in Agra, less than two kilometres (a mile) from the Taj Mahal, dozens of voters waited in line as polls opened.

“I voted because it’s my right, it’s my right to choose a good candidate,” said 32-year-old tour guide Yusuf Ali. “For us, it’s the development, the education, the employment, that’s the main criteria for us,” he told AFP.

Modi and the right-wing BJP swept to power in a 2014 landslide with their promise of “achhe din” (“good days”).

He has simplified the tax code and made doing business easier.

But despite growth of about seven percent a year, Asia’s third-biggest economy has not provided enough jobs for the roughly one million Indians entering the labour market each month.

And in rural areas, thousands of indebted farmers have killed themselves in recent years.

Gandhi fired back in an interview with The Hindu daily, published Thursday, saying Modi’s party was ignoring economic issues to focus on security. “The fact is that the biggest national security issue is unemployment,” he said.

Gandhi, seeking to become the fourth member of his family to take the prime minister’s office, has pledged to end abject poverty by 2030 and give cash transfers to 50 million families.

The BJP has promised a $1.4-trillion infrastructure blitz to create jobs.