BGMEA building to be pulled down by dynamite blast 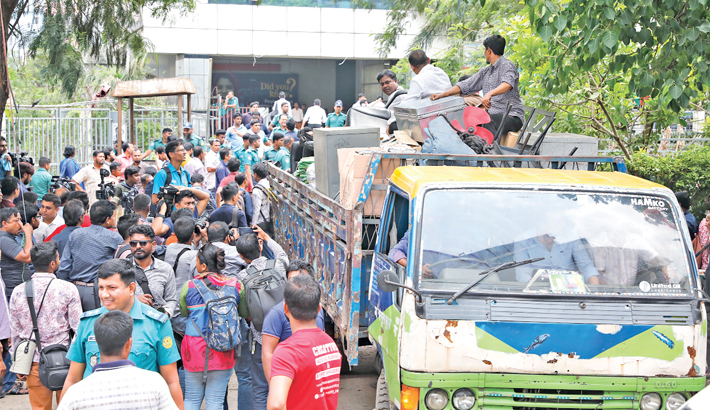 Labourers are shifting goods from different offices at the BGMEA building in the capital’s Hatirjheel area, as the Rajuk authorities have started process to demolish the 15-storey building on Tuesday. – Kamrul Islam Ratan

Rajdhani Unnayan Kartripakkha (RAJUK) will use controlled explosion with dynamites to knock down the 15-storey building of BGMEA in Hatirjheel.

The decision came after a team of RAJUK inspected the building on Tuesday.

Asked about the demolition process, she said: “We’ll demolish the building part-by-part. Then we’ll detonate dynamite and use bulldozers to tear it down altogether.”

“We’ve taken measures, including use of ultra-modern machinery for the demolition, to ensure the safety of the people around the area during the procedure,” she added.

Authorities have already cut off utility services to the building.

A team comprising Rajuk officials and members of law enforcement agencies has launched the demolition process on Tuesday morning.

Khandaker Aliour Rahman, director (administration) in Rajuk, said: “We are prepared to demolish the building. The building houses the offices for at least 19 organisations. We have asked them to shift their belongings.”

Responding to a query, he said the BGMEA authorities requested to give them till 5:00pm Tuesday to remove their valuables from the building.

“This is a part of the demolishment work. It will take some time to shift their belongings as there are many offices in the building. We’ll begin to demolish the building once they shift their stuff.”

During a visit to the BGMEA building in the afternoon, most of the tenants were seen removing their valuables from the building.

BGMEA President Siddiqur Rahman, however, said they need a week’s time to remove their belongings from the building.

In 2011, the High Court ordered demolition of the 16-storey building as it was constructed in defiance of relevant laws, calling it a ‘cancer’ in the canal.

Earlier on 2 April 2018, the Supreme Court granted BGMEA one more year (until 12 April 2019) for demolishing following a leave-to-appeal after giving an undertaking.

The 15-storey BGMEA building stands on a critical spot in Dhaka, blocking the flow of water between the Hatirjheel canal and Begunbari canal.

BGMEA has already moved most of its assets and offices to its new office at Uttara in the capital, which was inaugurated by Prime Minister Sheikh Hasina.

The new office building(13 storied) comprising two towers is being constructed on five and a half bigha of land at Lake View of Uttara (Sector-17) in the capital.