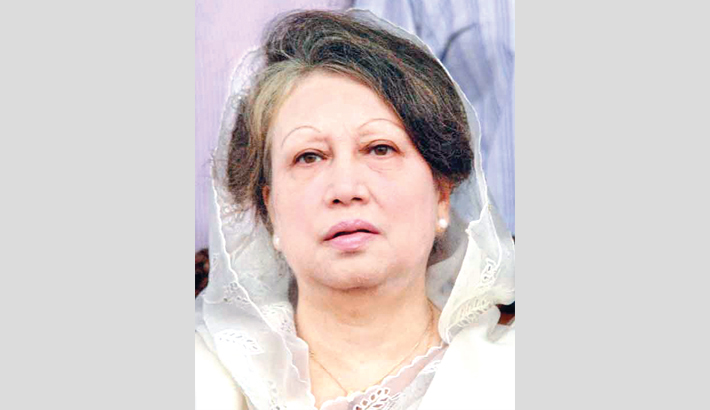 The ruling Awami League and opposition BNP have come up with proposals and counter-proposals for release of Khaleda Zia from jail.

The ruling party has asked its arch-rival to file an application for parole while BNP has been urging the government to release its chairperson Khaleda Zia on bail.

BNP lawmakers-elect are now thinking of proposing the government that they will take oath if they (govt) release their party chief on bail.

Awami League leaders say that Khaleda’s release is a matter of court and the party does not have any role in this regard.

The BNP chief has been serving 17 years’ imprisonment in two graft cases since February 8, 2018.

Awami League presidium member Mohammad Nasim told the daily sun that they do not want to make any comment on their condition.

“If court grants bail, she (Khaleda) will get release from jail,” he said.

“They (MPs-elect) will not do anything defying the party directive while they are also facing pressure from the people of their constituencies,” he added.

After a humiliating defeat in the December 30 national election, the BNP-dominated Jatiya Oikya Front rejected the election results and decided that its MPs-elect will not take oath.

After assuming office, Prime Minister Sheikh Hasina has repeatedly been asking BNP lawmakers-elect to join parliament and speak there.

Some BNP central leaders say that senior leaders are holding talks with Awami League leaders privately to reach an understanding to pave a way for Khaleda’s release either on parole or bail.

The lawmakers-elect will take oath if the party chief is allowed to go abroad for treatment, they say.

As per the ‘understanding’, Khaleda Zia might go to London any day before April 30, the last day for oathtaking.

“We heard that such a bargaining is going on between senior leaders of the two parties,” said an MP-elect of BNP.

BNP secretary general Mirza Fakhrul Islam Alamgir on Tuesday said, “I would like to clearly say that our leader (Khaleda Zia) has not given any decision yet about seeking parole.”

Asked about the Awami League-BNP ‘bargaining’ on Khaleda’s release, Awami League joint general secretary and education minister Dipu Moni answered with a counter-question -- whether the government and the ruling party have the authority to grant Khaleda bail or parole.

“She has been punished through a legal battle and she has to be freed following the same process,” she said.

Coming down heavily, the minister said BNP wants to do everything breaching the law but AL does not support unlawful acts.

“She has to appeal before us with a specific reason for the parole. We will consider it if she makes the appeal,” Kamal said.

There has been a rumour that Khaleda Zia might seek a parole as the hope for her release through legal battle has been fading away.

But BNP leaders do not say anything clearly on the matter.

“In that case, the government has to show good gesture and Khaleda has to file appeal,” he said.