‘Evict people living on risky hill slopes by May 15’ 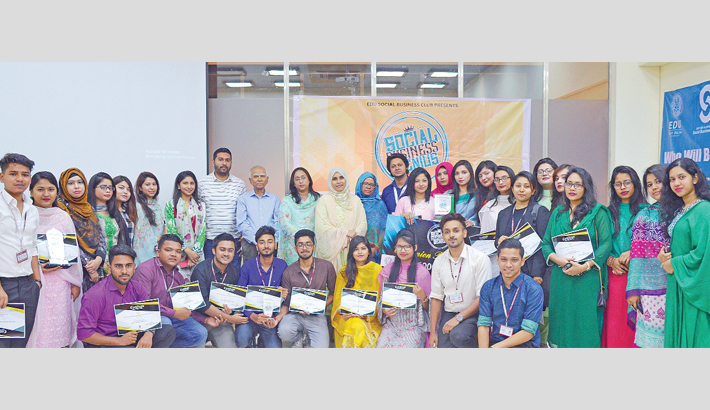 Winners pose for a photograph with guests after the completion of a contest titled ‘Social Business Genius’ at East Delta University (EDU) in the port city recently. — SUN PHOTO

The administration has given a directive to owners of the 17 risky hills to evict people within next one month to ward off recurrence of casualty in landslide in the upcoming rainy season.

Decision for cutting off the illegal gas, water and power connections of the encroachers within next 15 days was also taken at the meeting.

The committee Member Secretary and Additional Deputy Commissioner (Revenue) Delwar Hossain at the meeting informed that 835 families have been living at risky hill slopes and pockets of the 17 hills in the city and district.

Of the hills, 10 are privately owned while the rest seven are owned by Chattogram City Corporation, Railway, Chattogram WASA, Public Works and National Housing Authority, said the ADC.

Divisional Commissioner Abdul Mannan in his speech said the hills will have to be freed from the illegal occupants by May 15 to avert any untoward incident in the rainy season.

The government organisations will have to free their hills while letter will be issued to private owners in this regard, he said.

The district administration will help in the eviction drives, said the divisional commissioner. Chattogram Deputy Commissioner Md Elius Hossain and representatives from different concerned government organisations attended the meeting among others.

Mentionable, the high powered hill management committee was formed after the devastating landslides that left some 127 people killed in the city and district on June 11 in 2007.

The committee on different occasions made a number of recommendations like rehabilitating vulnerable families in safer places, providing them with financial assistance, evacuation by hill owners, disconnecting illegal power, gas and water supply lines, filing criminal cases against the illegal occupants and protecting the hills through eviction and afforestation.

With most of the recommendations remained unimplemented the administration carries out evacuation drive before and during heavy rainfall every year to avert loss of life.