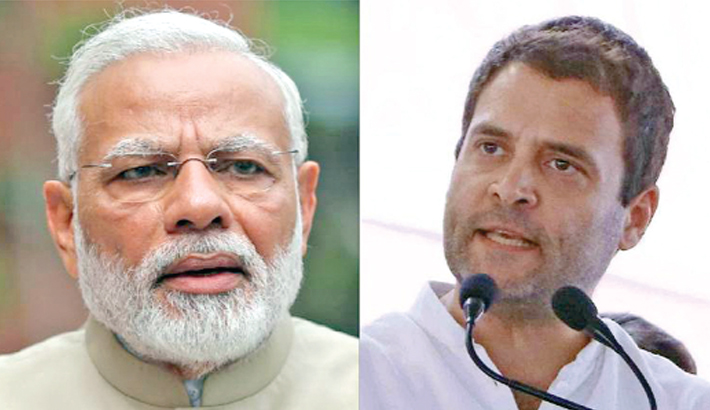 Bhatapara: Amid claims of “misusing” the armed forces for electoral gain, Prime Minister Narendra Modi Tuesday said the strength of “one vote” had enabled the surgical strike and air strike in Pakistan, reports PTI.

Addressing a poll rally here in Chhattisgarh, Modi said the India of today carries out surgical and air strikes across the border and shoots down satellite in space due to the strength of “one vote” of the people.

The Election Commission last week sought a report from poll officials in Maharashtra after Modi’s remarks at a rally in Latur, where he asked first-time voters to dedicate their vote to those who carried out the Balakot air strike.

The report was sought in the context of an EC advisory issued last month asking parties to desist from indulging in political propaganda involving actions of the armed forces.

Modi also stepped up attack on Congress chief Rahul Gandhi, saying it was the mindset of the “sultanate” of the ‘Naamdar’ to abuse the deprived and treat them as slaves.

Modi’s barb came a day after Gandhi made the “how come all Modis are thieves” remark. Modi attributed Gandhi’s comment to frustration among the Congress and its “Mahamilvati” allies caused by the “BJP wave” being witnessed across the country.

“These people are crossing limits daily. According to them, anyone whose name is Modi is a thief. What kind of politics is this? They have labelled a whole community as thieves only to get some applause, just to insult your ‘chowkidar’,” Modi said.

“I have a question. Why all the thieves have Modi in their names whether be it Nirav Modi, Lalit Modi and Narendra Modi? We don’t know how many more such Modis will come out,” Gandhi had said, addressing a rally in Maharashtra Monday.

“The Congress and its Mahamilavati allies are unable to sleep during night. Now they are abusing me in frustration, are insulting me. The voters of India are seeing this,” Modi said.

Meanwhile, Coming down heavily on Prime Minister Narendra Modi, Congress chief Rahul Gandhi Tuesday said he has “failed” to fulfil the promises made during the last five years.

“The promises Modi has given to you, he has not fulfilled. but Anil Ambani gets Rs 30,000 crore in Rafale deal. “The Prime Minister is speaking of nationalism and he gave the biggest defence deal to a person who has not made a single aircraft,” Gandhi charged.

The Congress President was addressing an election rally at the St Stephen college grounds here in Kollam district.

Hitting at the Sangh forces, the AICC chief alleged the country is now under attack from the BJP-RSS and there was an idealogical fight going on between the BJP on one side and Congress on the other. “No matter how many times you (BJP/RSS) attack us, we will use love and non-violence to convince you are wrong,” he said.

Gandhi asked the people how many of them had received the money in their bank account promised by the Prime Minister.

Gandhi assured the cashew farmers in the state that his party, if voted to power, will to take up their cause.”We will start a conversation to help make cashew growing a viable alternative”, he said adding that it was an “honour” for him to fight elections from kerala.