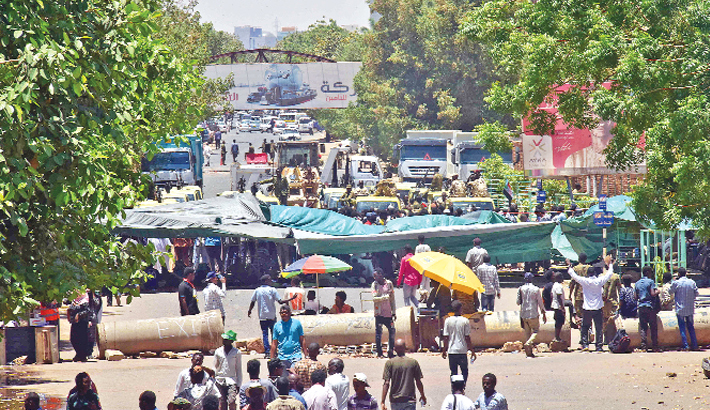 Thousands remained camped outside the complex in Khartoum overnight after protest leaders issued demands to the military council set up following the ouster of veteran president Omar al-Bashir.

The organisation that spearheaded the months of protests leading to Bashir’s fall, the Sudanese Professionals Association, called on their supporters to boost the numbers at the complex.

“There is an attempt to disperse the sit-in from the army headquarters area, they are trying to remove the barricades,” the SPA said in a statement, without saying who was responsible.

“We call on our people to come immediately to the sit-in area to protect our revolution.”

Witnesses said several army vehicles had surrounded the area and that troops were seen removing the barricades which demonstrators had put up as a security measure.

The SPA has urged the military council “to immediately transfer power to a civilian government”.

It said the resulting transitional government and the armed forces must bring to justice both Bashir and officials from his feared National Intelligence and Security Service (NISS).

The United States, Britain and Norway urged the military council and other parties to hold talks over the country’s transition to civilian rule.

In a joint statement by their embassies on Sunday, they warned against any use of violence to break up the protests, and said the “legitimate change” the Sudanese people demanded had not taken place.

“It is time for the transitional military council and all other parties to enter into an inclusive dialogue to effect a transition to civilian rule,” they said.

“This must be done credibly and swiftly, with protest leaders, political opposition, civil society organisations, and all relevant elements of society, including women.”

The military council on Sunday met with political parties and urged them to agree on an “independent figure” to be prime minister, an AFP correspondent at the meeting said.

“We want to set up a civilian state based on freedom, justice and democracy,” a council member, Lieutenant General Yasser al-Ata, told members of several political parties.

A 10-member delegation representing the protesters delivered a list of demands during talks with the council late Saturday, according to a statement by the Alliance for Freedom and Change umbrella group.

But in a press conference, the council’s spokesman did not respond to the protesters’ latest demands.

He did however announce the appointment of a new NISS head after the intelligence agency’s chief Salih Ghosh resigned on Saturday.

The foreign ministry said military council head General Abdel Fattah al-Burhan was “committed to having a complete civilian government” and urged other nations to back the council in order to achieve “the Sudanese goal of democratic transition”.

American actor George Clooney, who has campaigned hard to draw attention to the conflict in Sudan’s Darfur region, over the weekend urged world powers to pressure the military “to turn over full executive power to a civilian-led transitional government”.

“The most potent form of leverage would be to go after the assets laundered by Bashir and his allies through the international financial system,” Clooney wrote in a joint Washington Post column with rights activist John Prendergast.

“Sudan’s courageous protesters need more than words: They need strong international action for real change to have a chance.”

He also pledged that individuals implicated in killing protesters would face justice and that protesters detained under a state of emergency imposed by Bashir during his final weeks in power would be freed.

Bashir ruled Sudan with an iron fist for 30 years before he was deposed last week following mass protests that have rocked the country since December.

Tens of thousands of people have massed non-stop outside the army headquarters since April 6, initially urging the military to back their demand for Bashir’s removal.

But his departure in a coup failed to satisfy the protesters, who have demanded justice for Bashir-era officials. The SPA has also called for the confiscation of properties belonging to the ousted president’s National Congress Party and the release of soldiers who sided with their movement.

Late on Sunday, the military council said it has set up a committee to register NCP properties and seize control of them.