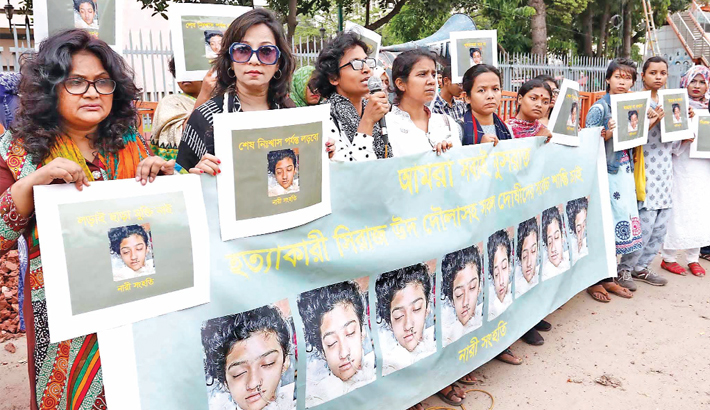 Justice For Nusrat - Nari Sanghati, a platform to protect women’s rights, forms a human chain in front of the National Museum in the city on Friday, demanding punishment for those involved in the killing of Feni madrasah student Nusrat Jahan Rafi. — SUN PHOTO

Angry protests flared up in Dhaka and elsewhere over the death of Feni Madrasa student, Nusrat, following an arson attack.

People from different strata of the society took part in the rallies demanding exemplary punishment to the perpetrators of the attack.

The demonstration was staged in front of the National Museum at Shahbagh intersection in the capital around 11:00am.

“Exemplary punishment must be awarded to the culprits involved in crimes like rape and sexual harassment of women in order to stop such horrendous offences,” said Golam Kuddus, president of Sammilita Sangskritik Jote, a cultural platform.

Later, the protesters took a procession. Starting from Shahbagh intersection, the procession paraded across different areas and stopped in front of Central Shaheed Minar.

Nusrat Jahan Rafi, a student of Sonagazi Islamia Senior Fazil Madrasa, was set on fire on April 6 for refusing to withdraw a case against Siraj Ud Doula, who harassed the victim sexually. Nusrat’s mother sued Siraj for the offence.

Nusrat was admitted to burn unit of Dhaka Medical College Hospital at night on April 10.

Students from other educational institutions also joined the protest around 11:00am.

In Kurigram, Bangladesh Mahila Parishad also formed a human chain in protest against the killing of Nusrat. Ekattorer Ghatak Dalal Nirmul Committee, an organization that is vocal for punishment to war criminals, and other socio-cultural organizations joined the protest.

Held on Kurigram-Chilmari highway, the human chain lasted for an hour.

In Barisal, Samajtantrik Mahila Forum and Samajtantrik Chhatra Front held a human chain to protest the killing of Nusrat.

The protest was held in front of Aswini Kumar Town Hall at 11am.

The demonstrators said the killing of madrasa student was premeditated. They said exemplary punishments should be meted out to the offenders.