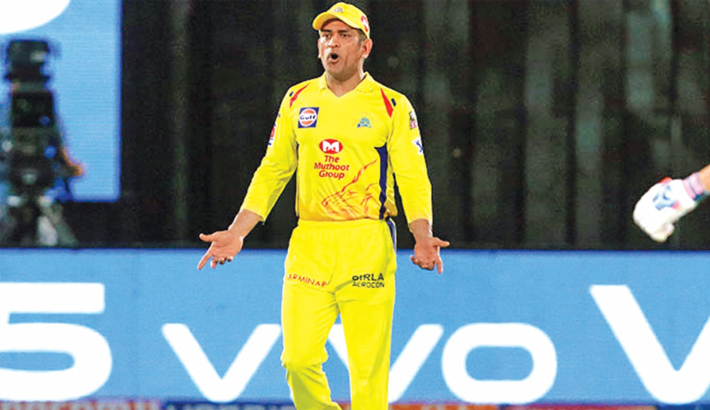 Mahendra Singh Dhoni notched his 100th win as a captain in the Indian Premier League on Thursday after helping Chennai Super Kings pull off a thrilling chase amid dramatic scenes in the final over.

Dhoni top-scored with 58 off 43 deliveries as Chennai chased down their target of 152 with number eight Mitchell Santner hitting a last-ball six against Rajasthan Royals in Jaipur. The visitors won by four wickets.

But the emotionally-charged encounter witnessed Dhoni losing his cool as he argued an umpiring call in the 20th over after storming on to the field.

Dhoni was bowled by England all-rounder Ben Stokes from the third ball of the final over to leave Chennai needing eight runs off the last three deliveries.

New man Santner then faced a full toss from Stokes that seemed above waist height and the umpire stuck out his hand to signal a no-ball that was over-ruled by his officiating partner at square leg.

An angry Dhoni walked out of the dugout to get into a heated exchange with the umpires as Stokes tried to pacify the supposed ‘captain cool’.

Santner, though, kept his nerves amid the commotion to hit Stokes’ last ball for a six over long-on to help Dhoni become the only captain with 100 wins, from 166 IPL games.

“They (Rajasthan) were able to build up pressure right till the end. Once you win games like these, you are able to take a lot,” the wicketkeeper-batsman said after the win.

“But it’s important to work on the negatives that have not gone well, while enjoying the win. Otherwise it can come back to hurt us later in the tournament.”

The former India captain has led Chennai to three titles in the world’s most popular T20 league and has also had a runners-up finish with the now defunct Rising Pune Supergiants in their two years of existence.

With Chennai tottering at 24-4, Dhoni once again soaked up the pressure to put on 95 runs with Ambati Rayudu, who made 57, for the fifth wicket to set up the chase.

He lost Rayudu in the 18th over and with 30 needed from the final 12 deliveries, Dhoni, known for his finishing prowess, got his team in a winning position despite struggling with cramps in the final few overs.

The match also witnessed a moment of fielding brilliance from Stokes who took a stunning catch at backward point to send back Kedar Jadhav for one off paceman Jofra Archer.

Stokes was airborne to a cut shot from Jadhav as he plucked the ball out of thin air while going full stretch towards his right.