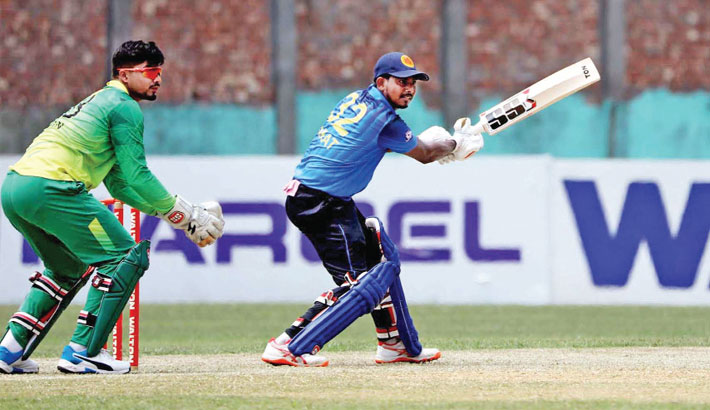 After winning the toss, Sheikh Jamal opted to bowl first. Soon, Jamal bowlers legitimised their skipper’s decision as they packed Abahani for just 211 runs for 9 wickets in their 50 overs. In their chase, Sheikh Jamal Dhanmondi Club cruised past the target scoring 215 runs losing 7 wickets with 7 balls in hand.

Super-league’s allure gave Sheikh Jamal some otherworldly prowess as their bowlers cut through Abahani batting line-up like butter. Jamal bowlers broke Abahani’s opening partnership with just 10 runs on the board as Jahurul Islam (9) was bowled out by Sheikh Jamal pacer Salahuddin Shakil. His opening partner Soumya Sarkar also failed to live up to his potential as he was caught by Nasir Hossain’s spin for just a single run to his name.

The middle order was also in a hurry to return back to the dressing room before the arrival of Mohammad Mithun (33) to the crease. But it was Mosaddek Hossain who made the difference for Abahani and saved their face with a scintillating century worth 101 runs off 139 balls with 6 fours and 3 sixes to his name. Mashrafe Mortaza (20) and Abdullah Al Mamun (26) also contributed to take the total to 211 runs for 9 wickets.

Sheikh Jamal bowlers were brilliant all-round starting Man of the match Nasir Hossain who took 3 wickets for 24 runs while Elias Sunny took 2 wickets for 42 runs. Salauddin Sakil and Ziaur Rahman each took a wicket for 43 runs and 59 runs respectively.

Sheikh Jamal also had a rocky start to their chase as their opener Hasanuzzaman (3) and surprise promotion Elias Sunny (0) went back to the hut early leaving the side reeling at 12 runs for 2 wickets. But the other opener Imtiaz Hossain (30) and AP Majumdar (56) steadied the ship with a 69-run partnership. Nasir Hossain (45) and Tanbir Hyder (38) then took on the reigns of the match as Ziaur Rahman (16) and Enamul Haque (15) gave the final touch scoring 215 runs with 7 balls in hand losing 7 wickets.

Winning the toss, Rupganj decided to bowl first and packed Uttara for a paltry score of 180 runs for 8 wickets in their 50 overs. Coming on to chase the measly total, Rupganj openers Mehedi Maruf (62) not out and Mohammad Naim (63) made the job at hand look like nothing more than a cakewalk as Mominul Haque’s late flurry of 47 runs helped Rupganj get over the target and score 181 runs for a wicket to brush aside Uttara.

In the other DPL match of the day, Brothers Union edged past Prime Doleshwar Sporting Club by a wicket in a thriller at Khan Shaheb Osman Ali Stadium in Fatullah.

Being put into bat first, Taibur Rahman’s 70-run knock powered Doleshwar to 250 runs for 5 wickets as Brothers Union got over the line with just a wicket and a ball remaining in their innings scoring 251 runs courtesy of some fine batting from Fazle Mahmud (70).