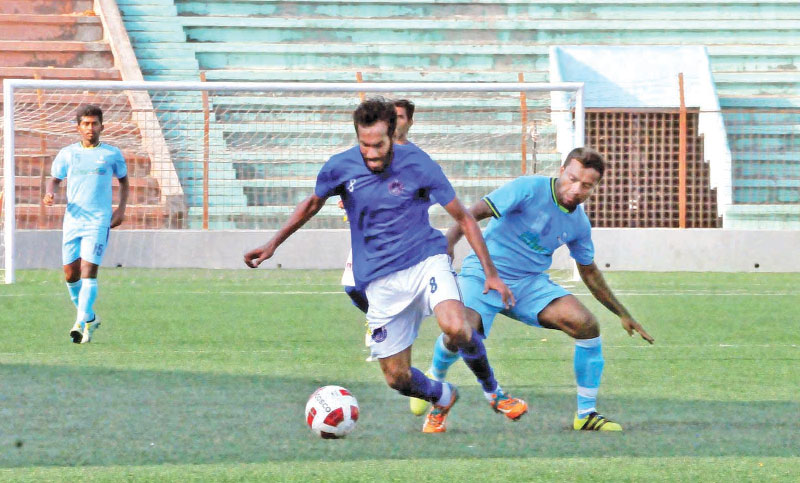 Players of Dhaka City Football Club and Farashgonj Sporting Club vie for the ball during their Bangladesh Championship League match at Bir Shrestha Shahid Sepoy Mostafa Kamal Stadium in the capital on Tuesday. The match ended in a goalless draw.

Australian pacer Mitchell Starc is taking legal action against his insurer to claim back the $1.53 m that he lost out on after missing the IPL last year due to injury. Starc picked up a calf injury in the second Test against South Africa last year before breaking down with a tibial bone fracture in the subsequent Test, reports Cricbuzz.

It has been reported by Fairfax that Starc filed a lawsuit in the Victorian County Court last week against the insurers of his deal to play for Kolkata Knight Riders, snapped up by the franchise for $1.8 million. He, however, didn’t bowl a delivery in the entire season, and was subsequently released by the franchise ahead of the 2019 season. According to the documents in court, the left-armer had a $1.53m policy which would be effective had he missed the IPL season through injury, with Starc having paid a premium of $97,920 to be covered between 27 February and 31 March in 2018, as stated in a writ, and having gone through a full medical by the insurers.

Starc is suing a syndicate of Lloyd’s of London, which is an insurance services company that provides coverage in unique circumstances, unlike those which traditional insurers offer. His contract also had a number of exclusions for old injuries.

“The parties have exchanged correspondence about the plaintiff’s claim which culminated in a final response from the defendant’s representative in the form of an email sent on 22 November 2018,” the writ said. “That email confirmed the defendant’s contention that the plaintiff is not entitled to the total disablement benefit.”

No comment was available from neither Starc or his manager.