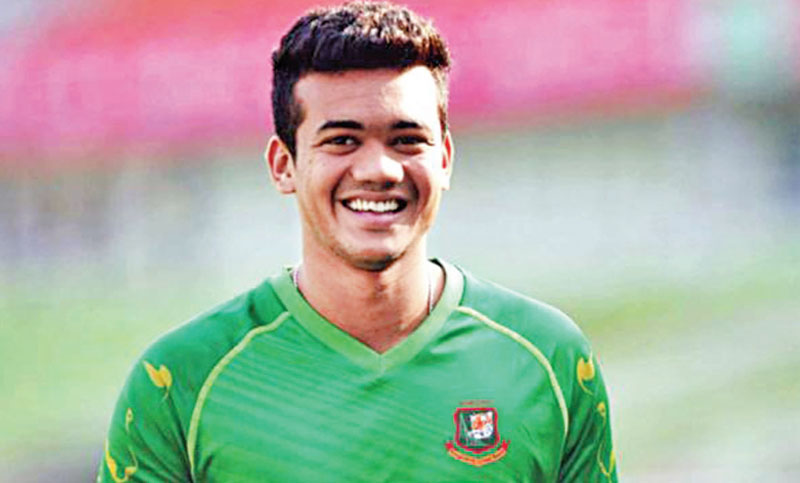 Pacer Taskin Ahmed looks to be in a fix as he is both elated and nervous before taking his first step towards making a place in the Bangladesh squad for the upcoming ICC World Cup.

The lanky pace bowler will be making his first appearance in competitive cricket since being injured in the last edition of Bangladesh Premier League as he is expected to feature for Legends of Rupganj against Uttara Sporting Club in the ongoing Dhaka Premier Division Cricket League at Sher-e-Bangla National Cricket Stadium in the capital today.

“They (Rupganj officials) saw me in the nets and was happy with my bowling,” Taskin told daily sun before leaving SBNS where he completed third session of bowling with full run-up.

“I will play the match with my ankle covered but I hope to play the game without taking any medication,” he said.

BCB chief physician Debashish Chowdhury stated that though he is starting his mission few days earlier than they planned initially, he does not feel that it will be a big problem considering the amount of confidence he had seen in the eyes of the bowler.

“We initially planned that he will play competitive cricket from April 13 or 14 but he decided to start a bit earlier and there is nothing wrong in it as after a rehabilitation period which lasted over two months someone can opt to start playing two to three days earlier than schedule,” he said.

Taskin sustained an ankle injury while trying to take a catch in the boundary line during his side, Sylhet Sixers’ last match of the Bangladesh Premier League sixth edition.

The injury ruled him out of Bangladesh’s ODI and Test series in New Zealand in February-March.

“It’s improving day by day and I bowled with full run-up for the third successive sessions and there was no problem at all,” said Taskin.

“It feels really well as I can bowl with full run-up after a long time and I hope that everything goes well tomorrow in the league match,” he said.

Taskin was the prime bowler for Bangladesh during the last ICC World Cup in Australia and New Zealand four years back where he took highest nine wickets for Tigers and featured in all six matches they played in the tournament.