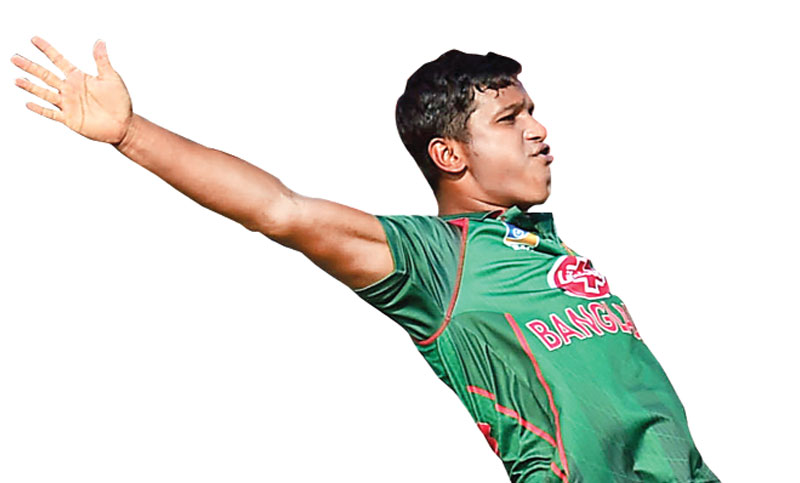 Bangladesh’s half-fit pace bowler Mohammad Saifuddin stated that he is ready to take up the World Cup challenge despite not being hundred percent fit during the upcoming global tournament.

Bangladesh Cricket Board (BCB) had to compromise on several occasions when it came to serve the interest of clubs participating in the Dhaka Premier Division Cricket League (DPL) in the past and it was no different this time round as Saifuddin-saga starts to unravel.

The pace bowling all-rounder was expected to have an injection after returning from the tour to New Zealand to get himself fully cured from the tennis-elbow injury that had been nagging him for quite some time.

However, he failed to get himself injected as he had to appear for the title aspirants Dhaka Abahani Limited which is run by BCB’s most powerful directors.

It was learnt that national physio Thian Chandramohan asked Saifuddin not to play in DPL and instead take the medicated injection which would helped him recover from right hand’s elbow injury.

Saifuddin could not follow Chandramohan’s instruction as that would have meant that he would not be able to play in the DPL for the defending champions as it would have forced him to be out of competitive cricket for some three weeks.

Saifuddin, who arrived on February 22 from New Zealand after completing the three-match ODI series against New Zealand, began his campaign for Abahani five days later.

BCB sources confirmed that national head coach Steve Rhodes is quite baffled by the entire Saifuddin episode as he considered him to be one of his major trumps taking into account Saifuddin’s all-round ability.

However, apart from grumbling there wasn’t much he could do about it considering the decision of Saifuddin availability in the league was taken by none other than his employers.

When BCB chief physician Debashish Chowdhury was asked regarding the matter he just opted to play it safe as he is also aware of the consequences if there is any slip of tongue.

“There is medical team in place for the club which he is representing and they must be taking care of him,” said Debashish.

Abahani’s physio Enamul Haque defended their decision of playing Saifuddin and suggested that he is much better now from the time he arrived to play for them in the league.

“Earlier we had to tape that (injured) area but now he does not need that,” said Enamul.

“The only issue is that he is having problem with his throwing arm and as a result we have decided to put him inside the 30-yard circle while fielding,” he said.

It was understood that when it comes to fielding, it will be the same case for him if he is selected for World Cup.

Former national head coach Khaled Mahmud, who is also guiding Abahani in the league, said that he does not feel that operation is necessary for Saifuddin despite strong recommendations about it.

“I don’t think he needs an operation. He is doing gym and weight training. Probably he will recover from it,” said Mahmud adding that he is not aware about the actual extent of Saifuddin’s injury.

“I am not sure about the seriousness of his injury but I don’t think it is too serious,” he added.

Despite everything half-fit Saifuddin said that he looking forward to take up the World Cup challenge though he is not thinking about World Cup and instead concentrating on DPL right now.

“To be honest I am not thinking about the World Cup. I am concentrating on DPL right now. When I will get the ticket for World Cup after the announcement of the squad then I will think about it,” said Saifuddin

“Every cricketer has a dream to do well in World Cup. If I get the chance it will be dream come true for me. The platform will be good to showcase our talent especially for people who are new in the team. If we can do well than it will be good for us as we will help us in future,” he said.

“The ICC event is batting friendly and often we have seen that it produces runs around 300. So it will be challenging and some of best batsmen of the world will play in the tournament which makes it more challenging. Nonetheless, I am ready to take the challenge,” he added.