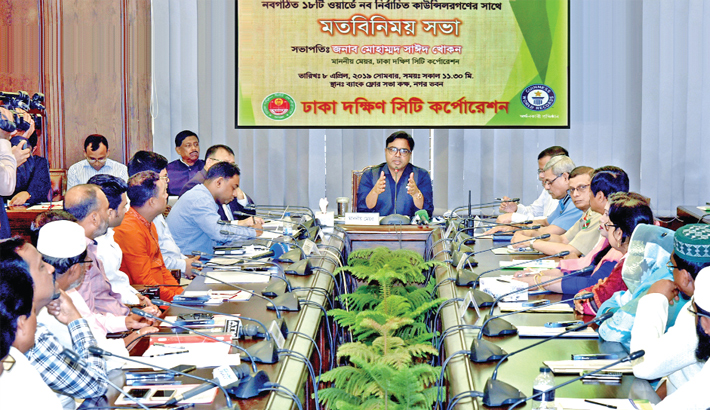 DSCC mayor Sayeed Khokon speaks at a views-exchange meeting with ward councillors at Nagar Bhaban in the capital on Monday. —SUN photo

“There is 40 percent manpower. It is very difficult to continue working with this poor manpower. The situation of Dhaka North City Corporation is also the same,” he said.

The DSCC mayor came up with the comments while exchanging views with the newly-elected councillors of newly formed 18 wards at the conference room of the DSCC headquarters.

He vented his discontent, as manpower structure of the DSCC was not approved since its formation in 2011.

It is a matter of sorrow and regret, the mayor said.

He fears that there may be water-logging in different parts of the capital this year.

“But I hope it will be less than that of the previous years,” he said.

He claimed that regular work, including improvement of drainage system, are being carried out continuously. The activities relating to drainage will end by the end of April, he said, adding that WASA is primarily responsible for addressing the problems of the water-logging.

“I think it’s high time we discussed the expansion of the agencies by raising its capacities or dividing them into different administrative units.”

Despite the fact that the DSCC is beset with different crisis, it has carried out massive infrastructure development activities, he said.

“Once city dwellers could not see the sky due to overhead billboards, but now we have got rid of this menace.

Khokon said: “We have a plan to turn the newly formed areas which has 80-82 square kilometers into a model city. But it will take time to implement our short, medium and long term project. The infrastructure of the areas has been developed in an unplanned way, but we have to develop in a planned way.”