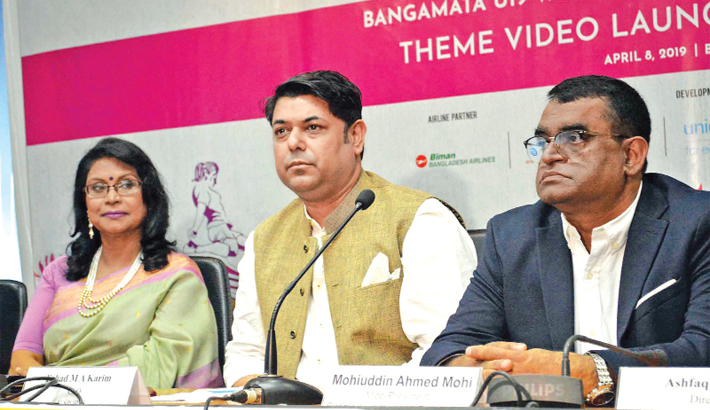 Prominent singer Rezwana Chowdhury Bannya is seen along with other officials during the theme video launching ceremony of the Bangamata U-19 Women’s International Gold Cup Football Tournament at BFF House in the capital on Monday. – BFF Photo

The theme video of the first Bangamata U-19 Women’s International Gold Cup Football Tournament officially launched at the BFF House in the capital on Monday.

Six U-19 women’s teams will fight for the title. Mongolia, Tajikistan and Laos will play in Group A whereas hosts Bangladesh will take on UAE and Kyrgyzstan in Group B.

Bangladesh will play UAE in the opening match on April 22 at 6pm (Bangladesh Times).

CEO of K-Sports Fahad Karim said that their goal is to promote the tournament named after Bangamata and women’s football in Bangladesh.