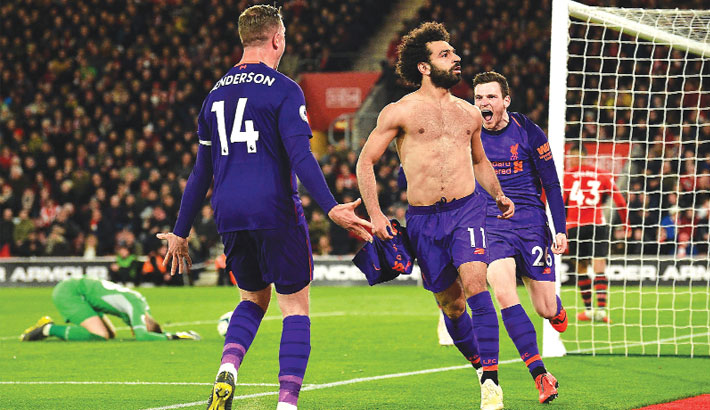 Mohamed Salah scored his first goal in nine games as Liverpool came from behind to keep up their title challenge with nerve-shredding 3-1 victory over Southampton in the final 10 minutes on Friday, reports Telegraph.

This was a dangerous fixture. Southampton coach, Ralph Hasenhüttl, Klopp’s friend, has done outstanding job since taking over at Southampton. Jurgen Klopp’s men had to come from behind at St. Mary’s after Shane Long’s early opener. However, Naby Keita’s first goal for the club brought the visitors level.

Salah waltzed his way through the Southampton defence at full speed, from inside his own half, to score – just as it appeared this awesome Premier League title race was tipping emphatically towards Manchester City.

With five games to go the Reds are back on top, two points ahead of City, having played a game more. If City win all their remaining fixtures they will be champions again, but the message is that Liverpool will push them all the way.

Salah did not give them the lead until the 80th minute, with substitute Jordan Henderson then scoring to confirm the result, and Liverpool did this by coming from behind and that felt hugely significant. They never gave up.

They have shown vast reserves of resilience throughout this epic campaign – and have claimed 16 points from losing positions, more than any other team. In the end, Liverpool deserved this victory. It is also the third league game in a row they have scored late to win. The first one was against Fulham, with an 81st-minute penalty, and then that astonishing 90th-minute own goal to beat Tottenham Hotspur.

It was Salah’s 50th ­Premier League goal – achieved in just 69 appearances, the fastest a Liverpool player has ever reached the milestone.

“It’s an incredible number, a huge achievement,” Jürgen Klopp said of Salah’s landmark and he could just as easily have been talking about the 82 points Liverpool have now collected in 33 games.