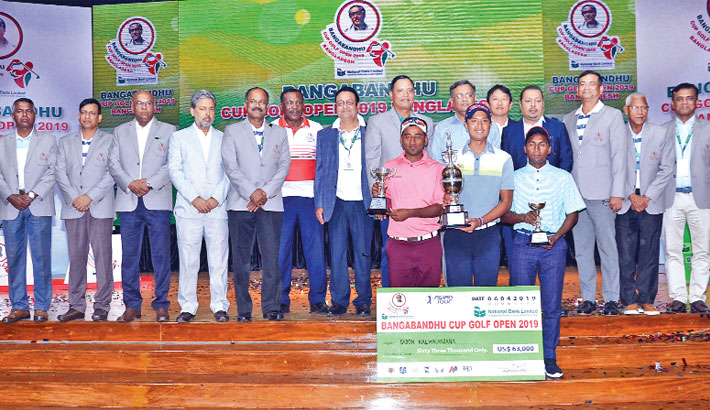 Thailand golfer Sadom Kaewkanjana claimed the US$ 350,000-Bangabandhu Cup Golf Open title on Saturday, carding nineteen-under-par 265 total to hold off the challenge of two Indians, both of who briefly overtook him in the closing stages of round four.

But Kaewkanjana came back to regain the lead on the penultimate hole of the day, and in the end, probably had to thank the sensational 62 he shot in round two, the best round of the tournament, in seeing off Ajeetesh Sandhu (266) and Rashid Khan (267), who finished 2nd and 3rd respectively. Just three shots separated the top 3.

Information Minister Hasan Mahmud was the chief guest of prize giving ceremony and distributed prizes among the winners.

Asian Tour’s Tour and Players’ Affairs Manager Unho Park was also present in the ceremony while legendary Caribbean cricketer Gordon Greenidge was the celebrity attraction of the event.

Bangladesh’s ace-golfer Siddikur Rahman started the day on fourth, although 7 shots behind the leader he wasn’t perhaps expected to challenge for a title he desperately wants to win, as the pioneer who put Bangladesh on the golfing map.

Even so, Siddikur will have been disappointed with how his round fizzled out on Saturday, shooting over par for the first time in four days, which made him completely lose touch with the top of the leaderboard. Eventually he finished tied for 12th carding eight-under-par 276 total after four rounds.

It also meant Zamal Mollah, for the 2nd successive year, finished highest in the table among Bangladeshis, although this year’s uninspiring tie for 10th can never compare to his exciting run in finishing 4th in 2018.

This was the 5th consecutive year that the Asian tour has come to Bangladesh, marking it as a fixture now on the respectable, professional tour catering to the world’s biggest and most populous continent. But what the Asian tour may lack in terms of prestige, or history or finance, compared to their American or European equivalents, it more than makes up for with its sheer growth potential. And you have to look no further than the progress the game has made in just one country, Bangladesh, in the last 5 years for a demonstration of that.