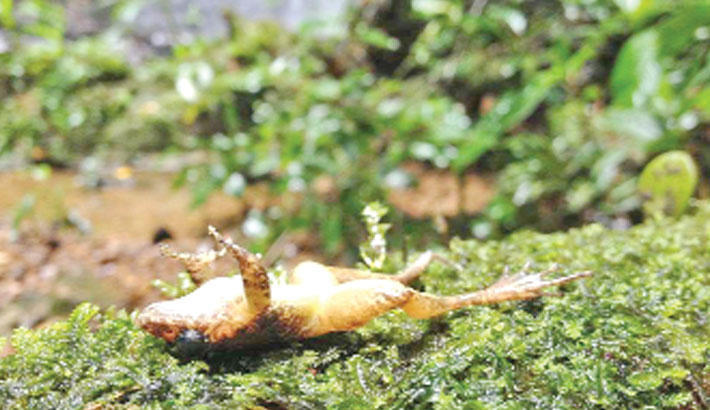 SANTIAGO: A deadly disease affecting amphibians has descended into a global pandemic that has already wiped out 90 species, a prominent US biologist warned Thursday at the World Organisation for Animal Health Aquatic Conference in Santiago, Chile, reports AFP.

Chytridiomycosis is caused by a fungus—Batrachochytrium dendrobatidis—that attacks the skin of frogs, toads and other amphibians.

As the creatures use their skin to breathe and regulate their bodies’ water levels, the damage caused by the disease eventually leads to heart failure and death.

Jonathan Kolby, co-author of a study published in March on the fungus’ devastating effects, lamented what he described as “the first global wild disease issue.”

“It’s over 60 countries right now, and that’s part of the problem,” he said.

Over the past five years, the highly contagious disease has already caused nearly 90 species to disappear, with over 500 impacted.

The rapid global spread of the fungus is due to a lack of animal trade rules and airport surveillance, which allows wildlife to be imported without examination.

“To solve it we have to focus on regulation,” said Kolby, who worked on the study alongside around 40 other international experts.

“Globalization is good for people but it has consequences to animals,” he added. In the US alone, five million amphibians enter the country every year.

Currently, the disease is most widespread in Latin America and Australia, with trade with Asia—where the fungus originated—blamed for the spread.

Scientists also believe a genetic mutation of the fungus may have made it more dangerous.

Amphibians play a major role in maintaining aquatic environmental quality. They also feed on mosquitoes, which carry human diseases such as malaria and the Zika virus.